A passion for turning pages 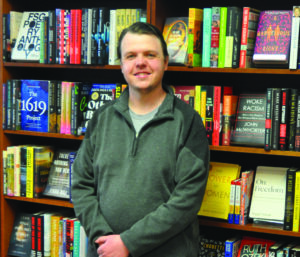 Hunter Gillum, the manager at Beaverdale Books, is now also a co-owner.

âIâve always liked reading,â says Hunter Gillum, which is an obvious understatement. Almost every room in his house has books in it. Some of those rooms have multiple shelves of books.

How many books has Gillum read?

âThousands?â he shakes his head, making it clear itâs too many to count. âI came from readers,â he smiles.

A passion for turning pages runs in his blood. His mom and grandma were also voracious readers, and they laid the foundation for Gillumâs love for books. In high school, his passion caught fire after delving into some of the classics, including Jack Kerouacâs âOn the Road,â Hemingwayâs âA Farewell to Arms,â âThe Great Gatsbyâ by F. Scott Fitzgerald and J.D. Salingerâs âThe Catcher in the Rye,â which he has read so many times that he isnât sure how many times he has read it, but itâs probably six or so.

When the 2011 graduate of Indianola High School went on to the University of Iowa, he opted for a degree in business management over library science, but he made sure to squeeze in time for books, too. He added a minor in English while also working at the public library, plus, like most English and literature aficionados in eastern Iowa, Gillum spent his fair share of time at Prairie Lights Bookstore, which caught his imagination.

After graduating in 2015, and possessing a passion for books, Gillum returned to central Iowa and began pursuing a profession in that realm. He met with Alice Meyer â owner of Beaverdale Books â to discuss the business of bookstores. Meyer offered him a part-time gig, to start, and Gillum accepted. After all, heâd be around books. That quickly developed into a full-time position, and, before long, Gillum had moved up to being the storeâs buyer/manager. Finally, as of last month, he is also the storeâs co-owner.

The independent bookstore recently celebrated its 15-year anniversary. During that span, many challenges have been weathered, including a changing economy, the emergence of e-books, major road repair work that funneled drivers away from the storefront, and, of course, COVID-19 with its mass of unimaginable complications. But, it turns out that central Iowa has plenty of book lovers who share Gillumâs affinity for a good read, thus, according to Gillum, the store is doing just fine.

âHis new ideas and fresh perspective will serve us well into the future,â said Meyer in a release announcing Gillumâs ascension. Although Meyer is âlooking forward to having some free time,â she will remain active in the business alongside Gillum and his wife, Kate, who is also active in the operation.

And books, books and more books. ♦