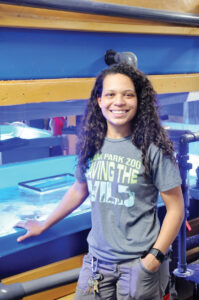 Dana Lain is the aquarium supervisor at Blank Park Zoo. The zookeeper helps care for corals that have been rescued from the Florida coast in order to protect them from Stony Coral Tissue Loss Disease. The goal is to eventually restore these organisms to their natural habitat. Photo by Jeff Pitts

âBig Mommaâ was a 330-year-old underwater giant coral mound. It thrived for centuries near Fort Lauderdale, and the record-setting giant was legendary for its longevity. But the mass of coral suddenly succumbed â in less than four monthsâ time â to a scary underwater plague known as Stony Coral Tissue Loss Disease (SCTLD).

Coral is often mistaken for being a rock or a plant, but these saltwater organisms are living animals. SCTLD is also poorly understood, but the virulent disease is running rampant in the saltwater off Floridaâs coast and debilitating the coral population. As such, the race is on to find a way to save this key component to the oceanâs ecosystem, and the Florida Department of Environmental Protection is working with dozens of partners from around the U.S. to investigate and solve the problem.

Blank Park Zoo has joined the Florida Reef Tract Rescue Project, and Dana Lain, the aquarium supervisor at Blank Park Zoo, is a big part of the effort.

There is a lot involved in keeping an ocean ecosystem operating correctly. Fish must be paired correctly in order to avoid catastrophe, proper filtration is of the utmost importance, and pH balances have to be kept in line.

âThe goal (of the Florida Reef Tract Rescue Project) is to pull as many healthy corals as possible for genetic banking,â says Lain.

Participating facilities hold the rescued coral colonies harvested from the Florida Keys for restoration purposes. The longer-term goal is to
replant the coral back in the reef.

The zoo has been planning the endeavor since last summer. It received its first corals in November. SCTLD was first spotted in Florida in 2014, and the stateâs underwater coral kingdom has been devastated since then, losing an estimated 75 percent of its population in less than 10 years. Once infected, the disease first shows up as white bands or lesions on live corals, and the infected tissue sloughs off, leaving only the white skeleton exposed. But the worst part might be that it spreads quickly, sometimes killing off an entire coral colony, such as Big Momma, in a short time.

Lain attended high school at Dowling Catholic before going on to graduate from Simpson College. She says that working with animals has been a lifelong dream, and she discovered her passion for zookeeping while serving as an intern in Washington, D.C. during her time in college.

âI like to watch fish being fish,â she says. âI love my job because I see them every day. I get to see them happy and healthy.â ♦