Local pro wrestling referee offers insight from inside the ring. 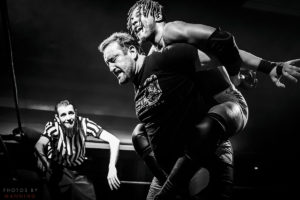 Local pro wrestling referee Jeromy Robb is known as âSkeletor.â Robb is part owner of
3XWrestling. The central Iowa organization has hosted live professional wrestling events
since 2005. Events are generally held on the first Friday of the month at either the Hispanic
American Legion or Franklin Junior High. Robb says a typical crowd consists of 100-300
people. Admission is generally $5-$20. The action in the ring is akin to what one watches with the WWE, but Robb assures the content is better suited for families. For more information,
visit www.3xwrestling.com.

âWhatâs it like being a referee in a sport with absolutely no rules?â

Comedian Jerry Seinfeldâs question seems like a fair one. Before most pro wrestling matches, the participants gather beforehand to pre-determine who will win, with which finishing move and a host of other details. For this reason, some say the sport is âfakeâ or ârigged.â But donât say such things to local pro wrestling ref Jeromy Robb.

âI hate the term âfake,â â he says. âItâs scripted, but I wonât say ârigged,â because with a script, things can change. Iâve been in a ring where theyâve had to audible and change the ending of a match.â

Even haters of pro wrestling have to admit that the
fast-paced action involves big and powerful athletes
operating in close proximity to one another and moving at high rates of speed. Thus, when the choreography doesnât go as planned, big-time collisions happen, and when big bodies bang into each other, injuries often occur.

âWe had a guy get injured a couple of years ago during the match,â remembers Robb. âHe gets a
concussion, and heâs just knocked loopy. Heâs supposed to go over (the ropes), but heâs supposed to hit this really weird finish that he canât even stand up for.â

Thatâs where the guy in the zebra stripes comes in handy.

A good ref will help direct the wrestlers to a satisfactory finish, relaying messages back-and-forth,
often without the fans knowing something went awry.

âYouâre supposed to be the guy that helps them communicate with each other,â he says. âThat way, they donât have to plan every little thing.â

If you ever watch WWE on TV, the ref is only visible when they need him to be, according to Robb. The rest of the time he operates off camera so the fans wonât see him communicating, positioning and doing other logistics.

Safety is another important referee function.

âThatâs one of my big things in 3X,â says Robb. âThat I have a safe wrestling ring. If somethingâs not safe, I need to know so I can fix it.â

Robb is part owner of the local 3XWrestling. He also occasionally refs for Pro Wrestling Revolver in Des Moines, CEW in Oskaloosa, PWP and Magnum Pro out in the Omaha area, and other promotions at longer distances, including Chicago, Kansas City and St. Louis.

âIâve worked as far south as Mississippi and as far east as Ohio,â he says, adding that, within each of the many different organizations, there are differing sets of rules. âItâs not just I get down and count to three. There are rules. They may be laxed in several promotions, but there are a few promotions where the rules are very heavy.â

How did Robb become the one enforcing these rules?

âIâve always been a lifelong wrestling fan,â he explains.

While in a transitional phase in 2007, Robb was pondering which direction he should direct his life.

âWhat better time to take an opportunity to at least try?â his grandma asked, referring to his dream of being a pro wrestler. Grandmas know best, so Robb enrolled in The Harley Race Wrestling Academy and began training. But about a month-and-a-half in, some people saw that he might be better suited for something else.

It wasnât what Robb wanted to hear, but he decided to listen to the old wrestling legend and hall-of-famer, and after officiating 600-plus matches, Skeletor hasnât looked back.

Before leaving school, Harley honored Robb with another priceless gift. Standing just over 6-feet tall, Robb weighed less than 130 pounds at the time. He was much skinnier than most wrestlers, and his mates were giving him grief.

âHarley called me Skeletor,â Robb remembers. The name stuck, and he still goes by it today. âFrom that point on, I just started introducing myself everywhere as Skeletor. Harley gave me that nickname.â ♦