When Frank Perez hears footsteps, the 76-year-old can still shift into another gear. 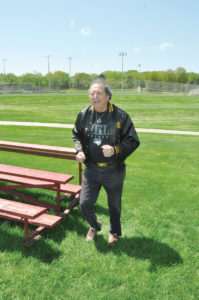 Whether he is off to the races, playing softball or pole vaulting, Frank Perez is aging
gracefully due to his morning stretching routine, healthy diet and good genes.
Perez will be inducted into the Iowa Senior Games Hall of Fame this month.

âI heard these footsteps,â says 76-year old Frank Perez, as he remembers his best competitive moment at the Iowa Senior Games. Perez led after making the turn in the 200-meter dash. But behind him…

âWhen I was about 20 yards from the finish line, I looked over my shoulder, and this guy was good, and he was coming hard for me,â says Perez. âSo I put it in whatever gear I had left.â

âAt first, they didnât know who won,â says Perez. âIt was that close. I just beat the guy, just barely.â

Annually, Perez proves he is faster than most any other senior his age in the state at the Iowa Senior Games. His demonstrations of speed, agility and athleticism are nearly unparalleled. Perez has earned 148 medals during his two decade Iowa Senior Games career.

Competing in 19 events last year, Perez medaled in all but one of them. This year, he will compete in 20 events â he is adding the javelin throw to a resume that already includes the 50-meter dash, 100-meter dash, 200-meter dash, long jump, broad jump, football throwing, field goal kicking, softball competitions, shot
put, pole vault…

âIt is all about the timing,â informs Perez as he visualizes his technique. âPeople ask, why do you want to do these things?â he chuckles. âI said, âBecause I can compete, and I can win.â Back when I was younger, I was just another average guy. Now Iâm not the average guy. Iâm still doing well.â

Some seniors, after nearly two dozen competitions, might not get out of bed for a
month, but not Perez.

âI get a little sore, like anybody else,â he says. âBut I feel pretty good the next day.â

A morning exercise routine is the key to his longevity. The highly decorated senior stays limber thanks to his daily stretching regimen that begins at 5 a.m.

âEvery morning Iâll get up and do exercises for about 20 to 30 minutes,â he says. âI donât do it for the muscles or anything like that. Itâs just to keep me limber. … I drink my milk every day, and I take my vitamins every day, and I hope thatâs what is doing it, but I donât know.â

âI tell everybody â Iâm Hispanic â it is the tortillas and the beans that are loaded with protein,â he jokes. âThat is what keeps me going.â

âBecause I love it,â he responds. âI love sports. Iâve always loved sports. And the thing of it is, I was always just kind of a neutral guy. I was never a superstar. So I just maintained that level. So now all these superstars are going downhill and, knock on wood, Iâm still going, and I love it. I love to compete.â

Perez will be inducted into the Iowa Senior Games Hall of Fame this year. ♦