You meet âthe one.â And, just as your paths appear they may head in different directions, you put your best foot forward â that romantic gesture that makes you stand out from the others and land that first date. But it canât stop there if you hope for a second date â or later, if youâre looking for âhappily ever after.â Area couples attest, no matter what the stage your budding relationship is in, to keep the flame burning, itâs those romantic efforts that provide the spark. ♦ 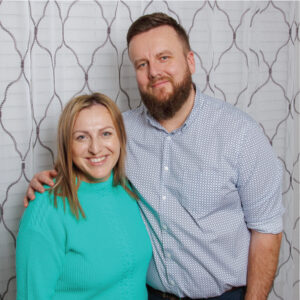 When Arnel Dubinovic hit that âadd friendâ button on Facebook by accident in 2016, little did he know one day he would be proposing marriage to his new online friend, Nermina.

They quickly realized they had a lot in common â like being from the same part of Bosnia and even working for the same Hy-Vee as teenagers (though they never met there) â and their relationship blossomed, thanks to long talks, frequent texts and regular FaceTime meetings.

âHe was interesting, and it seemed like we could talk forever,â Nermina says.

The romantic little gifts and notes they mailed to each other didnât hurt either. The next year, they were married. Then came children â a daughter in 2018 and a son 11 months later.

As a young couple with kids, their romance has entered a new phase. They make time for movie nights together at home and weekend getaways when Nerminaâs parents can watch the kids.

Of course, the little gestures are still important. But instead of mailing them to Arnel, Nermina now tucks notes into his lunchbox. 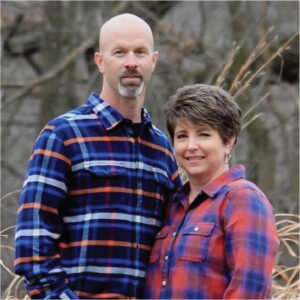 Not often does a flood get the ball rolling on a life-long commitment. But it did for Jay and Tawyne Gibson. The two began dating during the historic floods of 1993. Although the two had been friends in high school, it wasnât until that fateful summer when the waters rose that the passion did, too.

And while meeting at a water point â Jay, a National Guardsman, was working at the one where Tawyne was getting her water â may not seem like the most romantic setting, it provided the two ample time to talk and share the suppers she began to deliver.

âThey say the way to a manâs heart is through his stomach,â Jay says. âHomemade food is a lot better than an MRE (Meal Ready to Eat).â

Fast forward, and Jay and Tawyne are now providing their kids with some tips in the romance department â primarily to take time to get to know the other person.

âIf you donât like each other as friends, chances are, that relationship isnât going to last long,â Tawyne says. 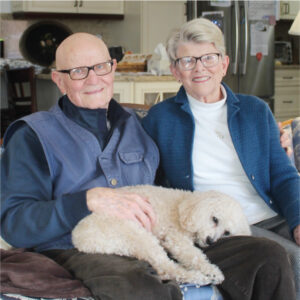 When Gordon and Martha Bivens met, they knew a thing or two about relationships. Both had been married for many years before being widowed. But despite the separate paths of their lives, Gordon and Martha found their way to The Village in Indianola â and to each other.

They had a little help from their dogs. Marthaâs dog, Beau, spotted Gordonâs dog, Frosty, and was off for a close-up meeting, pulling the leash out of Marthaâs hand. A conversation naturally ensued, as did occasional walks and dinners. They attended events and programs at The Village and became good friends.

Being the romantic he is, Gordon finally asked if he could give her a hug, and she said yes.

âI thought we were just friends giving hugs, but then, one day, he kissed my cheek,â says Martha. âI began to realize that maybe this was more than just friendship.â

And, so it was. Gordon made the ultimate romantic gesture, proposing to Martha with a poem he had written â aptly titled âOn Bended Knee.â Martha said yes, and, on Jan. 12, 2013, they embarked on their lives as a married couple. 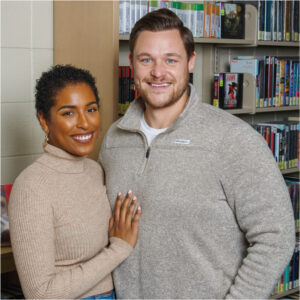 Being the bubbly person she is, Kimberlee Williams didnât hesitate to tell the stranger who was serving her at a restaurant that he had a nice face. The remark made an impression. Mitchell would remember her the next time their paths crossed.

âHe remembered me when he saw me at the bar I worked at three months later,â said Kimberlee. âHe said, âYouâre that girl who told me I have a nice face!â I replied, âSounds like something Iâd say.â â

While Kimberlee says their personalities are quite different, itâs a plus for their relationship.

âWe balance each other out. I am very outgoing and bubbly, and he is very chill and quiet. We bring out the best in each other,â she says.

The two enjoy a variety of activities together so have plenty fun â along with some romance.

âWe love to travel when we can. Exploring new places together helps keep things fun. We also both love to eat so always cook together. Making time to unplug and do things together keeps our relationship strong,â Kimberlee says.