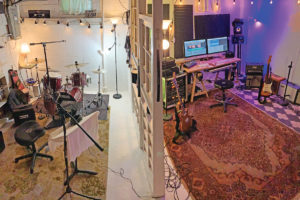 Dave and Anne Ducharme-Jones have recorded three albums from their home studio.

Itâs March 16, 2020. The governor of Iowa just shut down bars to slow the spread of COVID-19. Local musicians who perform at dozens of venues each week are suddenly out of work. They practice, they strum instruments, and they sing, but when will they perform again for a live audience? What do they do to stay occupied?

For two local musicians, they recorded new music at home.

Dave Ducharme-Jones, a full-time musician, was playing four nights a week pre-pandemic at various venues, with his wife, Anne, his Ducharme-Jones Band or with other musicians. When the pandemic hit, he initially relished the time to slow down for a few weeks.

âThen, it became worrisome. Weâd thought itâd be over by July. All our gigs were getting cancelled. Finances took a hit,â Ducharme-Jones says. âFiguring out what to do next, we decided to focus on recording.â

So he and Anne ramped up their song writing, recording tracks at their home. With social distancing rules, Dave came up with a way to keep band members involved, yet safe.

They laid vocals and guitar tracks, then sent the track over to his drummerâs home. Their drummer built a rhythm track for the songs and dropped off a thumb drive on Daveâs front porch.

The coupleâs recording gear and studio is located in their basement, which saves time and money. Ducharme-Jones has recorded three albums in his home, which has both pros and cons.

âYou can record whenever you want. A drawback is, if youâre booked at a studio, then you canât put it off,â he explains. âAt the house, you have lunch and do a little here and there. It can go on forever, and you can work the life out of a recording.â

The result is a 12-song list. Eight will go on their unnamed CD, which will be released this fall. One of the songs written and sung by Anne, âOn the Darkest Nights,â was consciously written with the pandemic in mind.

âThe basis of the song is weâre all in this together, and weâll all pull together as one,â says Ducharme-Jones.

Since age 15, Matt Terronez has played and sang in countless bands. When the pandemic hit, he lost 80 percent of his gigs with his two current bands, the RhythMatics and Boomerang.

Canceled gigs meant extra time to write and record, so he began recording music in his 600-square-foot home studio, which contains drums, guitars and keyboards and serves as a band rehearsal space.

A multi-talented musician, Terronez plays guitar and keyboard and sings. Heâs written six new songs since the pandemic and admits he hasnât recorded in years. Normally heâd collaborate with fellow musicians, but he found it a challenge.

âCollaboration is hard. The technology to complete a record is a challenge. Weâre all learning how to do this remote. Itâs a new skill,â he says. âIâll go back and forth with our tracks.â

Heâs posted recordings on YouTube and Facebook and is surprised at the thousands of people watching online concerts and videos.

âStreaming is a way to share what youâre doing,â he says. âIâm constantly pleased with the enthusiasm Des Moines fans have for music and the number of people who love live music. Weâre more grateful than ever for the group of people who tune in.â

Jon Locker, who owns Sonic Factory Studio West, a recording studio in Urbandale, initially saw a dip in business in March, when people canceled or postponed their sessions.

Then, in mid-April, he witnessed an uptick of music recording.

âPeople had time at home, writing music,â he says. âAll the while, we could still social distance from the sound engineerâs booth and wipe down the mics after recording.â

Locker is also a musician, plays bass guitar tracks for musicians and formerly played with the Nadas. He noticed more musicians sending in home-recorded tracks to be finished.

âWe definitely saw more finishing since COVID,â he says. âOne reason might be they got their government money and thought to invest in themselves. I just help put the âsugarâ on their recordings.â

He knows local musicians are hurting and searching for ways to increase their revenue. He admits itâs hard to keep a studio open without any bands, but heâs relied on corporate recordings.

Locker gives a piece of advice before musicians hit the studio for a session: âRecord your rehearsals and go back and listen to it,â he says. âWork out the kinks before you pay for expensive studio time.â ♦