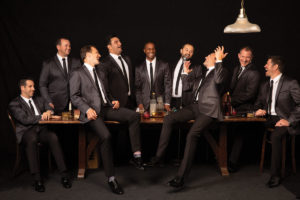 Central Iowa native Tyler Trepp performs with Straight No Chaser at the Civic Center on Dec. 11. Trepp is pictured with the microphone, sixth from the left.

The a cappella singing group Straight No Chaser performs iconic venues such as The Chicago Theater and the Ryman Auditorium in Nashville. But for one group member, the Civic Center in Des Moines is his favorite place to perform.

Tyler Trepp, who grew up in Urbandale, is excited to perform with the rest of the group for its Open Bar tour on Dec. 11 at the Civic Center.
Trepp graduated from Urbandale High School in 2003 and then from Indiana University in 2007. While attending college, he sang in choirs and with an a cappella group. A year later, Straight No Chaser released a 12 Days of Christmas video parody on YouTube, which attracted millions of viewers, as well as a record deal. In 2009, Straight No Chaser added three additional singers, including Trepp, who sings tenor and vocal percussion.

The group has released seven full albums and four EPs. It sings mostly cover songs from various musical genres. All singers have a hand in the song selection process.

Trepp, in an interview with CITYVIEW, says, âWe arrange the songs and vote on it. Often weâll test it out on the audience first to see if itâs popular enough to remain on our set list.â

The group selects from an array of genres, including current Top 40 songs, classic easy listening, Broadway tunes and holiday favorites.

âWe try to do songs that appeal to anyone from age 8 to 80,â says Trepp.

Not all songs â especially those with heavy instrumentation â make the cut.

âThe Beach Boys is easier to arrange than a Metallica song,â he says. âOne song by Radio Head, âCreep,â you think it wouldnât sound good. But it turned out really cool sounding.â

Trepp says that most folks are familiar with a cappella music, which means âmusic performed with no instruments.â He says, âWe heard about some season ticket holders who didnât think theyâd like our type of music. A lot of them are definitely surprised after they hear us and then become fans.â

Part of their repertoire is to sing melodies and parodies, generating audience laughter. The 12 Days of Christmas injected other tunes, such as âChristmas Down in Africa,â to the tune of a Toto song. They perform Broadway, Disney and iconic movie song parodies.

âPeople really enjoy our melody parodies,â he says. âWe like being goofy on stage and showing a lot of humor.â

âI grew up in Des Moines going to shows at the Civic Center,â he says. âIt takes me back to when I was a kid, when Iâd go there to see âThe Sound of Music.â I always thought it would be cool to perform on that stage.â

Trepp says he enjoys returning to his hometown to see family and friends.

âItâs awesome to be able to perform on this stage with my friends and family in the audience,â he says. âI love all the Iowa people. Itâs an overwhelming feeling of joy.â ♦