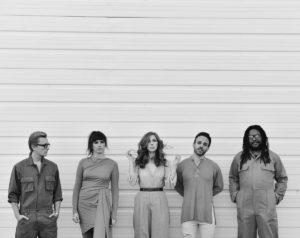 âWe say our influences are mostly core influences, such as the Beatles, Paul Simon, David Bowie or anything from Motown. All of these types of music really excite us,â she says. âBut we can never give a complete answer to which genre we play.â

Lake Street Diveâs music is part pop/rock, part jazz, part neo-soul, and a little bit R&B. Their album âSide Ponyâ hit No. 1 on the Billboards Alternative Album chart with the song âGood Kisserâ landing in the top 5 on Americana Radio.

All of the band members make vital contributions to the albums, and their assorted talents benefit the end result.

âWeâve always been a band with equal parts,â says Price. âNobody has more say than the others. With five songwriters, everyone contributes. Itâs no pressure because we have each other. If one person has writerâs block, then the other writer might be opposite. We feed off each other.â

The biggest change since the band formed has been its effort at team songwriting.

The band recently performed at the Apollo Theater for singer Mavis Staplesâ 80th birthday celebration. Several of the groupâs concerts are co-headliners with the Woods Brothers or as an opening act with the Avett Brothers. The tour this year consists of 50 concerts, which started in June. So far, at least six concerts are already sold out.

The group members feel honored to perform at each concert venue.

âWeâre pretty stoked every place we perform,â says Price. âWeâre blown away by the amount of people at our shows.â

Since their genre is unique, so is their audience, which doesnât fit into a typical fan base.

âOur fan base appears to be getting broader,â she says. âWhat always gets me is talking to the families after our shows. Itâs often the grandparents down to the grandchildren, telling us they listen together. That makes me happy.â

The band gained notoriety through social media and the Internet, citing a big break with YouTube.

âWith YouTube videos of our live music appearing in peopleâs living rooms, that did a lot for us,â Price says. âSometimes social media is negative, but itâs been a great tool for us.â

The band looks forward to its return to Iowa.

âWe love Iowa,â she says. âMaybe a bit more than other states because our own Bridget Kearney is from there. We have spent more time in Iowa and always enjoy the people and our shows there.â