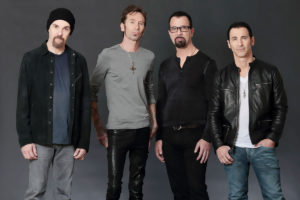 Four Emmy nominations. Six No. 1 singles. Rock Artist of the Year. Out of all these accomplishments, Godsmack drummer Shannon Larkin says one success isnât listed.

âWeâre most proud of our 20-year anniversary,â says Larkin. âItâs an amazing thing to be involved for 20 years.â

Godsmack performs, along with co-headliner Shinedown, at the Lazer Anniversary Show at Wells Fargo on July 29.

The band released its seventh studio album titled âWhen Legends Riseâ in April. After its release, Godsmack now ranks fifth with 23 hits on Billboardâs Mainstream Top 10 Rock Songs, just behind Aerosmith. Larkin stresses the new album name doesnât refer to themselves as legends, but rather itâs the rebirth of a new sound.

âWe matured. We all turned 50, and our sound has changed over the years,â says Larkin. âOur musicâs not all piss and vinegar, angry anymore. The album reflects where weâre at in our lives. Weâre all in a good place.â

Larkin dispels the myth of being a rock legend, saying, âI clean up dog shit in my backyard just like everyone else does.â

To avoid getting stuck in a time warp, the bandâs music changes.

âWho wants to make the same record over and over?â he says. âIt gets boring â not only for us as musicians, but for our fans.â

One example is the âBulletproofâ music video. The video idea was born from an actual conversation with the band members about how to make the video.
âAll of the directors submitted material that seemed too cheesy,â says Larkin. âSully (vocals and guitar) said, âWhat if I made it myself?â â

âThen I said, âYeah what if you did make it, and everything went wrong?â â

The result? A parody of everything that could go wrong.

âWe definitely made a conscious decision to make it funny,â says Larkin. âMaking music videos is usually a boring, energy-sucking and monotonous process. This video was hilarious.â

Online social media alters the current music scene, and Larkin misses the old-school vibe. âIâm 51. I collect records, CDs, cassettes,â he says. âI used to take a record, study the artwork, lyrics and look at the band pictures. Itâs just a shame kids will miss out on what I had.â

Part of their 20-year success is taking a year off every four years to regroup.

âWe come back fresh after working together in very close quarters,â he says.

One way he remains creative during off times is through his blues band, âApocalypse Blues Reviewâ with fellow guitarist Tony Rombola, playing clubs in Florida.

At the concert, Shinedown and Godsmack will share production, lighting and designs.

âThe good news is fans are gonna get two headline shows for the price of one. Thereâs lots of cool things happening,â he says. âYouâll just have to come and see it.â

Godsmack and Shinedown, along with opener Like A Storm, perform at Wells Fargo on July 29. Tickets cost $39-$79; available at www.iowaeventscenter.com. ♦