Rockability punk band at Nitefall on the River 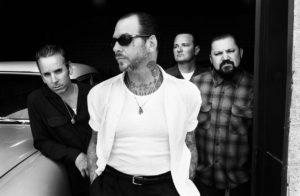 Punk rock â a music staple of the 1980s â is still alive with the band Social Distortion. Yet, they donât label themselves as just punk â more of a rockability, bluesy-rock punk.

Mike Ness, founder, lead singer, songwriter and guitarist of Social Distortion, spoke from his home in Orange County. He explains what type of music the group plays by saying, âI call it like if the Rolling Stones and the Ramones got into a car accident â thatâs what we sound like. But at the end of the day, we play rock and roll.â

Social Distortion performs June 20 at Nitefall on the River at the Brenton Skating Plaza. Opening acts include Aaron Lee Tasjan and Jade Jackson.

Theyâll play classic songs, such as âStory of My Lifeâ and âWhen Angels Singâ and selections from their album âMommyâs Little Monster,â originally recorded in 1983.

On June 29, the group re-releases its live album, â20th Anniversary Live at the Roxy.â Ness says the re-release is an important live recording for old and new fans.

âItâs a chance for people who have never heard our music,â he says. âA new release means people donât have to hunt for music in a record store.â

Ness formed the band in 1979 when he was in high school.

âI had a vision, and I was never afraid to let that vision evolve,â he says.

He admits their music has changed over time as heâs aged.

âI was an angry teen and my music reflected that,â he says. âIâve grown, and my music has grown as well.â

âThese types of music are a huge part of Social Distortion and always will be,â he says.

The music is not geared toward a certain audience, avoiding a narrow music genre. âWeâre not marketing our music to new listeners or what we think they want to hear,â says Ness. âWe just write honest music and people seem to relate to that.â

Ness believes his music has passed the test of time, acquiring new fans. When he looks out at the crowd during a concert, itâs not a certain age group of fans, which is âweirdâ for him.

âI see all different types of people. Dads bring their sons, and sons bring their dads. Moms and daughters come too,â he says.

Ness recently performed in the 2018 MusiCares Concert for Recovery.

âBeing a recovering drug addict and alcoholic brings an important message â to align myself with other recovering addicts,â he says. âItâs an epidemic â musicians are dying (due to drug use).â

He supports the cause and gives hope to others suffering from addiction, saying, âIf youâre addicted, you can find your way out.â

Ness is looking forward to playing in Des Moines and performing hits, as well as new, unfinished songs.

âWe donât get to Iowa very often. Itâs just another opportunity to show more people what weâre about,â he says.

âSome of our best shows are not necessarily in the biggest venues. The small cities are a big deal, and we know that 50 percent of the show (success) is the crowd.â