Do you want to be a rock star? 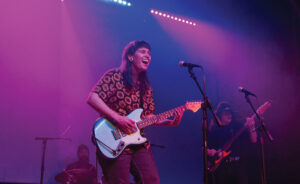 While perched on a chair in a practice booth, Allegra Hernandez strums a bass guitar beat to AC/DCâs âDirty Deeds.â Hernandezâs student follows this lead, intently repeating the same chord, albeit, more deliberately.

In another practice room, Lilli Spahr practices singing with an instructor. The backdrop of her room contains a large picture of Jimi Hendrix and a band set up with microphones, speakers and a drum set lining the back wall. The first song the 11-year old memorized was âYou Shook Me All Night Long,â another AC/DC hit. But her greatest inspiration is Lzzy Hale with the hard rock band Halestorm.

Hernandez and Spahr are just two of the many music lovers who participate at the School of Rock in West Des Moines, which opened in January 2020. The franchise is loosely based on the 2003 movie by the same name. Students from ages 3 to 80 currently take various lessons, including drums, keyboard, vocals, bass and electric guitar.

The performance-based music program leads up to concerts with an all-student band at the end of the semester, typically held at Woolyâs. Musicians are grouped by ages. 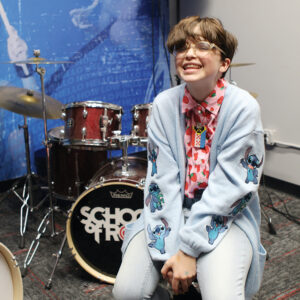 One of the requirements for instructors is that musicians have either a music degree, a professional performing music career, or play regularly in a band.

Hernandez is a bass player and began teaching that instrument when School of Rock first opened. Hernandez teaches 25-30 private students, leads a Rock 101 class, and directs performances for two rock groups from ages 7-18.

Hernandez also performs music and says that teaching at SOR is a high-energy, fun environment.

âItâs made me become a better musician.â

The most challenging aspect is memorizing more than 50 songs to teach to students. Hernandez works on personalizing lessons.

âYou have to hear what they have to say. I can tell them what to play, but music is an art form. A student has to make sure they feel what they express in music,â explains Hernandez.

âI really like the music they do at School of Rock. Friends think itâs cool that Iâm coming here,â she explains.

Spahr performed her first concert at Woolyâs and a second one at the Jordan Creek Amphitheater.

âI told my school counselor about it. Itâs kind of scary to be performing in front of a crowd,â she says.

Spahrâs mom, Leslie, says that, since her daughter has begun voice lessons, sheâs witnessed a change.

âIâve seen her grow confidence and self-esteem,â says the proud mom. âShe told me when she was 3 years old, she wanted to be a rock star.â ♦