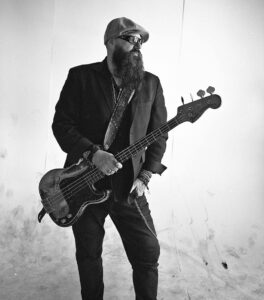 Scot Sutherland got his first bass guitar for Christmas in 1983. He has been playing ever since. Sutherland plays at the Greenwood Lounge on Jan. 24 and Jan. 31; you can also see him live on Feb. 12 at the Winter Blues Fest.

On his way to becoming a seasoned blues bass guitar player, national Blues Foundation award winner, and Iowa Blues Hall of Fame member, Scot Sutherland, has played with hundreds of musicians in the past 25 years. He chalks up his reputation simply by saying, âIâm pretty easy to get along with.â

As a full-time bass guitarist based in Des Moines, Sutherland has played blues with some of the greatest bands and musicians in the world. A five-year tour with the Tommy Castro band netted him a blues music award band of the year in 2010.

Heâs played with Samantha Fish early in her career. In 2018, an exciting touring opportunity with rising stars Mike Welch and Michael Ledbetter proved promising until Ledbetter passed away.

As an 8-year-old, Sutherland thought banging on the drums might be ideal. As his mom looked into piano lessons, he noticed other instruments. There was a ton of guitar players, but only a handful of bass players, who performed in multiple groups while playing numerous gigs. As a teenager, he got his first bass guitar for Christmas in 1983.

He was attracted to players where the bass was prominent in the songs.

âI attribute my love of bass by listening to the extremely creative bass players,â he explains. âSubconsciously, it seeped into my brain.â

Before he played bass, he recalls the first blues record he bought at age 13, Muddy Watersâ âHard Again.â  Fast forward 25 years, and he discovered that heâs played with or met every musician who ever played on that album, except for Muddy Waters himself.

âItâs a small world to listen at age 13 and the privilege now of meeting everyone,â he recalls.

Heâs toured with various bands off and on consistently since 1995.

âAfter the gig with Tommy Castro, that band elevated my name to be more noticeable to the blues genre and better respected,â he explains.

However, he doesnât just play the blues. When people ask his genre preference, he simply tells them, âIâm a fan of music. Some people say Iâm a fan of all music, except, you fill in the blank. I might be playing that music tomorrow. Iâm never prejudiced toward music and need to be open minded about a variety of music.â

He applies that openness towards music venues as well. As heâs played sold-out European venues, heâs currently hosting a Monday night live jam at the Greenwood Lounge in Des Moines. When heâs in town, he plays with the Ducharme Jones band.

Sutherland has traveled all over the nation, but his roots keep him in Des Moines with his wife and family.

âEveryone thinks you have to go to New York or L.A. to be successful,â he says. âI dig Iowa. Thereâs lots of great musicians, and creative people are staying here.â

You can catch Sutherland at the Greenwood Lounge on Jan. 24 and Jan. 31; he plays Feb. 12 at the Winter Blues Fest. ♦