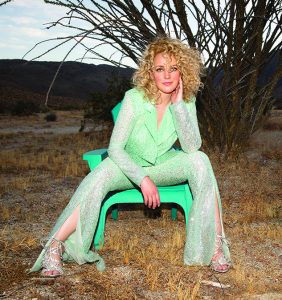 Cam canât wait to get back on stage, and central Iowa country music fans canât wait to catch her show at Big Country Bash, July 2, in St. Charles at Avenue of the Saints Amphitheater.

When country musician Camaron Ochs (known as Cam) returns to touring this summer, it might have a historic feel.

âItâs going to be an emotional, transformative event,â she says. âThis year will be something Iâll never forget. Iâll tell my grandkids how we got on stage and performed again. I think itâs something that will really stick with me.â

After enduring a pandemic-induced concert hiatus of more than a year, Cam can barely wait to return to the road. Once she does, it wonât be long before the star makes a stop in central Iowa for the Big Country Bash on July 2. The two-day outdoor music festival in St. Charles boasts an impressive lineup consisting of 10 country acts.

Cam chatted with CITYVIEW from her home in Nashville. Two months before the world shut down for the pandemic, she gave birth to her first child. She named her daughter Lucy.

âIt was a blessing in disguise,â she says. âI had lots of time with her. It was really wonderful.â

In addition, Cam released âThe Othersideâ album in October 2020. As she gets older (sheâs 36), her albums and writing become more introspective.

âThis album has the full gamut of emotions,â she explains. âThereâs a dance number, thereâs a romantic, falling-in-love tune. Itâs introspective and matched what everyone was going through.â

Her songwriting speaks from her heart as in the single, âTill Thereâs Nothing Left.â She sings about âme and you in the backseat, driving me crazy.â Fan reaction includes an older gentleman who recalled his youth when he used to go parking.

âIt made me happy,â she says. âWeâre all from the same spot, to be where youâre at, living in the moment.â

Sheâs earned a handful of nominations from the Grammys, Country Music Association and Academy of Country Music. Sheâs proud of her advocacy for other musicians, as she serves on the Grammy and ACM boards for diversity and inclusion task force.

âIâve been vocal about barriers people face in the industry,â she explains. âWomen, people of color â itâs not set up for them (in country music). Itâs disheartening to hear how bad the numbers are; itâs a lot to swallow at first. But weâre seeing tiny shifts. Iâm happy to roll up my sleeves and do something, like my parents taught me.â

Cam gave a TED Talk about musicâs significance. She knows the commercial side of music can be distracting.

âMusic exists in every culture,â she says. âItâs super healing and helps us process things as a group. Music should never be underestimated.â

Cam has toured in Iowa and enjoys the people. âEvery time I come there, itâs such a warm welcome and a great crowd. Itâs a good vibe. Everyone is surprisingly sweet, and Iâm looking forward to it,â she says. âWeâve had a year of practice, so weâre more than ready to get going.â

For more information on the Big Country Bash, visit www.bigcountrybash.com. ♦