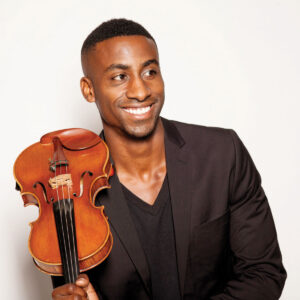 Violinist Kai Kight combines music and inspirational talks, and he comes to central Iowa at ciWeek in March.

Can music be a metaphor for life? Musician Kai Kight thinks it can.

Kight is a classical violinist and composer who uses his music to inspire audiences for self-realization.

Kight brings his performance and talk to DMACC Westâs ciLive (Celebrate Innovation) event. In itâs 12th year, this yearâs theme is âAmplifiedâ and focuses on innovation and amplifying imagination and inspiration. Kight will be performing and speaking at this free event on March 10-11, which is virtual and open to the public.

Kight, 28, is based in Los Angles and grew up in Washington D.C. At age 3, he saw a musician playing the violin on TV and told his dad he wanted to play it.

His parents enrolled him in lessons at age 3. By age 13, he was playing in school orchestra and with various quartets. Because of his location, he played at the White House, the American Embassy and hundreds of D.C. landmarks.

While attending college for an engineer and design program, he continued playing violin in groups. It was something he needed for survival.

In the mornings at college, heâd head right to the practice room before classes, just as the doors unlocked. The dual learning experience allowed him to speak the language of those who worked in different professions, as opposed to if he just obtained his music degree.

In college he was asked to talk and perform for a group of professors. He admits he was intrigued but extremely nervous.

âI was too nervous to speak and mostly ended up performing,â he remembers.

Even though he was confident performing, speaking was a challenge. As he spoke at Michigan State, he was âsuper academicâ with slides, yet he noticed something was off. The next time he spoke in LA for a nonprofit, he prepared a similar presentation. He scrapped it and instead got on stage to tell a story.

He finally found his calling.

âPeople appreciate a more human introspection,â Kight says. âI can be myself and not force myself into something Iâm not.â

By combining music with stories, it helps to get to the emotional side of a topic. People are pleasantly surprised when he comes on stage and begins playing his violin.

âThereâs a surprise element. Music gives a curiosity. With music, youâre anticipating the next note. Storytelling combined with music helps bring people out of a monotonous day, providing introspection,â he says.