Pet Rock lived through the era 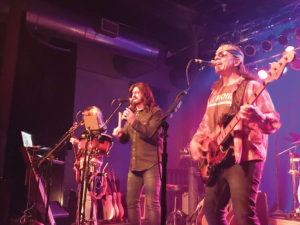 Remember the sounds of the 1970s? Not the guitar-smashing hard rock, but the soft, flowing, sway-to-the-music melodies that had you humming? Thatâs what youâll hear when Pet Rock plays at Woolyâs on Oct. 24.

The band members had played together in various bands, and in 2014, Flam and Duke consumed a few cocktails and suggested they put together a 1970s soft rock band.

Christopher Frost, who is an âencyclopedia of the 1970s,â was immediately on board. After about a year of practice, they performed at venues in the Midwest to rave reviews.

âOur first show was overwhelming,â says Duke. âPeople want to see this type of music. We â and everyone we know â loved this music, either in their childhood or our parentsâ lives. People are taken back and feel nostalgic and mindful of happy times.â

The band lived through the era.

âI had my AM radio and my 45 records,â says Duke. âI had a huge collection of pop music, and I stayed home listening to it all.â

They have a large rehearsal space and 70 songs on their set list. Five band members sing, which is a credit to their success.

âItâs not easy to harmonize,â Duke explains. âItâs because we work at it and rehearse all the time. We work hard to get it right.â

Prior to COVID-19, the band played various venues. One special performance was the Slowdown in Omaha, where they played two sellout shows in one weekend. They performed with the Omaha Symphony for a Symphony Rocks concert session.

Fans appreciate how they pay tribute to the entire 1970s era and bring the entire experience to the concert. Concertgoers show up dressed in 1970s attire, flowing hair, tie-dyes and an overall hippy look.

âWe have a party atmosphere. Itâs not just getting loaded, itâs going down memory lane,â says Duke. âIowa is a favorite place to play. Itâs our home away from Omaha.â ♦