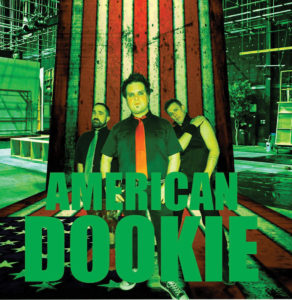 Fans of Green Day music can take a holiday and attend American Dookie: A Tribute to Green Day.

American Dookieâs lead singer and guitarist Johnny B. Lentz talked to CITYVIEW prior to their upcoming concert at Woolyâs on Aug. 28.

The band consists of three members, including Lentz, Travis Luchtenburg, bass and backup singer, and Jesse Caruthers, drummer and backup singer. The trio has played together off and on for 20 years, and the band is based in Cedar Rapids.

One evening the three were playing a Halloween gig, and Johnny dressed up as Billie Joe Armstrong, the lead singer of Green Day.

âI had the guy liner on, but some wisecracker said I looked liked Joan Jett instead,â he laughs.

After the show, Johnny mentioned to his band mates about starting a Green Day tribute band. They knew the songs. They kind of looked like them. It was a win-win decision.

The band name, American Dookie, is taken from two of Green Dayâs albums, âDookieâ and âAmerican Idiot.â They performed their first all-Green Day music concert in early 2019, where the performance was ârough.â

âWe learned that, if youâre going to be a tribute band, you have to pay attention to all the details, the look, how they talk to the crowd. It was a big learning curve,â he says.

Theyâve honed their craft by watching live recorded concerts and practicing deep cuts from all of Green Dayâs albums. One crowd favorite is the long version of âJesus of Suburbia.â

âGreen Day lovers go crazy with this nine-minute song,â he says. âYou should see their faces light up with excitementâ¦ âTheyâre going to play this?â â

Johnny says they are the only Green Day tribute band in the Midwest, and they hope to get into larger venues, such as Minneapolis and Chicago.

âCOVID-19 is a challenge,â he says. âIt changes daily as to when our concerts get canceled. Weâve done live streams but not sure how well it translates to the performer, playing to a TV camera with no audience.â

âWe try to make it intimate with the crowd,â he says. â(With) the same high energy and fun youâd expect from a Green Day show.â

After a recent concert in Omaha this year, they received some positive feedback.

âPeople have come up to us and said, âYouâre about as close to the real thing as Green Day,â â he says. âItâs amazing and feels good to honor and play tribute to them.â ♦