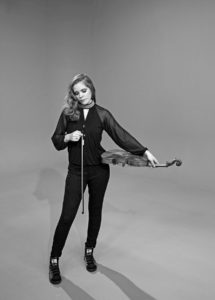 When you think of a violinist, you might envision a musician dressed in conservative black attire while expertly bowing her instrument to a Mozart song.

Not for Kathryn Fox. Her recent repertoire includes the gamut of genres from western swing, to bluegrass, to classic rock. Her latest gig had her playing at various bars and music venues in the Des Moines area before the pandemic hit.

When listening to Fox for the first time, one might wonder, how can a young woman make a violin sound so good?

Fox comes from a family of musicians and singers. Both of her parents were choir directors. Her dad played viola in the orchestra and played jazz guitar. A relative played with the Nitty Gritty Dirt Band. She first took piano lessons, then started playing the viola at age 9.
She mainly played classical music in high school but changed once she attended college at the University of Miami and at the Henry Mancini Institute.

âIn college, they were constantly teaching classical players to be more versatile,â she says. âThe school helped me to play in other ways than I was trained to play.â

She began playing the violin and explains why she switched instruments.

âIt seemed like a progression that needed to happen. More people said they wanted a violin instead of a viola to play with them,â she says.
In college, she played live concerts with famous musicians such as Pharrell Williams, Gloria Gaynor, Lou Graham and the Beach Boys. She recorded an album with George Benson, whom she also appeared with on a PBS television special.

âRecording with him felt like a huge, surreal experience,â she recalls. âI learned a lot.â

Since then, she plays the violin (calling it a fiddle, so people can better relate) in the Cardinal Sound, a jam grass band. She toured with Barrage 8, a Celtic womenâs group and played in countless wedding string quartets. She sings and writes music, as well as teaching music lessons at Southwestern Community College.

Her latest foray into rock and blues came after attending jam sessions at Carlâs as a 28-year-old, which she says was initially intimidating.

âIt can be scary to dip your toes outside of classical music and not reading notes off a page. It takes courage to be vulnerable,â she says. âSome people have a preconceived notion of a young white woman playing the blues.â

At the jam session, she met local guitar great Bob Pace, who asked her to sit in with him. Since then, the two have formed a duo, The String Prophets.

She likes how her fiddle sounds in different genres.

âIt can be like a jazz trumpet or a guitar,â she says. âEvery genre, I want to be the best version of myself. Iâve learned from everyone in this town.â

Catch Kathryn with the String Prophets on July 22 at the Stuffed Olive and July 19 at Summerset Winery. ♦