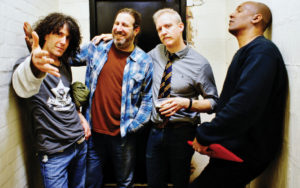 When the Spin Doctors perform at Adventurelandâs Oktoberfest on Oct. 5, they bring 30 years of musical showmanship. Lead singer and Spin Doctorâs co-founder Chris Barron spoke to CITYVIEW about the bandâs upcoming gig.

Spin Doctors was formed in 1988 by a group of guys who attended a music conservatory. As a 1990s jam band, the group found Billboard success with hits such as âLittle Miss Canât Be Wrongâ and âTwo Princesâ and were nominated for a Grammy as well as an American Music Award.

Barron says that while recording âTwo Princes,â their drummer included a unique snare drum sound. âThe studio didnât like the unusual deep sound and told us to find a different beat. Band member Eric Schenkman insisted on using it.

âThe sound blew my mind â Iâd never heard a drummer sound like that. Eric told the studio âno,â that this is our sound. It took four hours to figure it out,â says Barron. âFrom then on, we knew early on to let them know whatâs a big deal and whatâs not.â

Barron began writing songs at age 15, thinking it would be cool to write a song about how someone feels. The bandâs latest album, âIf The River Was Whiskey,â is based on songs from their early career.

âWe first started in New York City, and to break into blues clubs, we were supposed to play covers. We wanted original music and wrote old blues-Muddy-Waters-type of songs and sat on it for a while,â he says.

The band stayed together except for a two-year break. Barron says their hits draw fans in, but the live music keeps them coming back. Unlike bands that just play their part on stage, Spin Doctors take it to the next level. Barron takes voice lessons, admits to an âobsession of working like crazy off stage, so it rolls off your fingertips onstage.â

âWeâre constantly pushing and pulling, kicking the can. Weâve got subtle musical interplay going on,â he explains. âIt gives a spontaneous prismatic-sparkly sort of feeling that comes across on stage.â

Fans of all ages attend concerts. Barron says some fans grew up listening to their music in their parentâs car.

âLittle pellets dig our music. They donât know who the hell we are, they just respond,â says Barron. âWeâve been lucky. We hit a universal thing in our music. People of all ages respond. Itâs cool.â