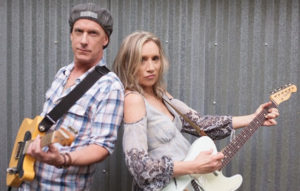 The Ducharme Jones band is making the rounds at various Des Moines music venues. As a duo or with a full band, Dave and Annie Ducharme Jones both play guitars and sing, rocking out to Tommy Petty, singing âJoleneâ or belting out one of their original blues, rock or roots tunes. CITYVIEW talked to the duo between music gigs.

CITYVIEW: Why did you move from Austin, Texas, after a successful 30-year music career?

Dave: I went to high school in Des Moines, playing with a band. Annie is from Okoboji, and we moved to the Bay area in California and then Austin. My dad had a stroke, and we wanted to be closer to family. While visiting in 2016, we played at Leftyâs and realized there was a vibrant music scene building right here in Des Moines. We told ourselves, change is good.

CITYVIEW: It seems youâve performed together forever, but itâs only been 10 years.

Annie: Dave has played since high school. I supported Dave, while we raised our son. I used to have stage fright and struggled with anxiety. But when I started writing music, that disappeared. Now I feel more comfortable â almost at home â on stage.

CITYVIEW: Tell me about your albums.

Dave: We just finished our second album, âVagabonds and Poets.â Many of the songs are heart-felt recollections of times spent together, pursuing music and the search for satisfaction in the artistic process. Iâve had two solo albums and three albums with my prior band, Rainravens. I feel like we stay in a certain genre without being predicable. It all makes sense whether we play jazz, rock or blues. We play on our strengths.

Dave: Venues have their own personality, but we love the Greenwood Lounge. I love it when we see new faces in the crowd and when our audiences turn their friends onto us. Thereâs a big music community in Des Moines.

CITYVIEW: The friendly banter onstage doesnât seem like an act.

Annie: Thereâs something special about watching Dave play guitar. One time he had a fever and hit the stage. By the end of the performance, it was like magic pouring through his fingers.

CITYVIEW: How do you define musical success?

Dave: I like my journey. Iâm able to play with a passion and inspiration. I like it when I come out of a gig and go âWoo, that felt good.â

Annie: We love what weâre doing. Weâre not in competition with other musicians. It doesnât matter how many people show up; we put on our best performance. ♦

You can catch the band on Aug. 16 at the Greenwood Lounge or Aug. 24 at Captain Royâs.