Blues band based its name on an original Italian drummer named Jimmy. 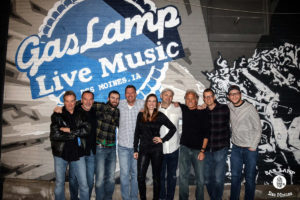 With names such as âJumpinâ Joshâ and âJive Willis,â youâd think these Jimmy the Weasel band members were seasoned, talented blues musicians straight out of New Orleans. You would be right about the talented aspect, but theyâre located in Des Moines.

Jimmy the Weasel was formed three years ago by Tom Buckmiller. The band based its name on an original Italian drummer named Jimmy.

âRegarding the nicknames, we thought it would be a fun way to pay respect to the traditional blues guys and honor the heritage of the blues,â says Tom, also known as âTbuck,â a guitarist and vocalist for the group.

The band plays blues, rock and soul, depending on the crowd. Favorite artists include Stevie Ray Vaughan, Muddy Waters and the Blues Brothers.

âSometimes we play hardcore blues or more mainstream music. Weâll mix it up with some dance music. We adapt material depending on the vibe of the audience,â says Tom. âWe try not to do the same thing over and over; we want to keep it fresh.â

They play mostly local venues and include favorites such as Mickeys in Waukee and The Whiskey House in Ankeny.

He credits the band members as a group of âgenuinely good people.â

âWe donât have the typical band drama. Everyone knows their role and wants to keep the train on the tracks,â he says.

Jimmy the Weasel often features other blues musicians, such as Bob Pace and Matt Woods, adding to the bandâs strength.

âWhen one musician is doing a solo, others really listen. Itâs not showmanship or one-upping someone else. Itâs like icing on the cake,â he says.

Most band members have day jobs. Tom is a professor at Drake, Sara is a family physician and Mike is a music director. Their current drummer is in his 50th year of drumming.

The band is appreciative of its fan base, called âWeasels.â Regardless of the crowd, they enjoy intimate venues where they can interact with fans and bring them on stage.

âOur simple goal is to perform at a high level and entertain whatever crowd is in front of us. Whether itâs 1,500 people or 50 people, it doesnât matter. Weâll put on a show anytime we hit the stage,â he says. ♦