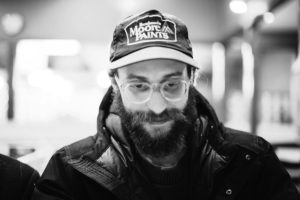 While Ryan Stier does wear glasses, the title of his solo project is not a nod to the extra vision they provide. The name goes deeper than that and instead references Stier expanding his mind.

âI feel like Iâve spent a lot of my life trapped in my own view of the world. I feel like Iâm using this music project as a tool to expand my view of the world and try out new perspectives. I tackle a lot of old conditions and fears. I like to explore things like fear of death, fear of relationships, stuff like that. I just try to dig in a little deeper and see if I canât alter my own view of things,â he explains.

His solo project is far from his first foray into music. He got his start in music when he began playing the acoustic guitar in the early 2000s and fondly remembers playing a lot of Blink-182 covers. Stier is also involved in two other Des Moines bands; he is a founding member of The River Monks and plays in Annalibera. One of his favorite moments of his music career was playing with The River Monks at 80/35 in 2014.

âWe played right before Conor Oberst. They played at the main stage, and we were on the local stage, but I like to say we opened for Conor Oberst. Heâs been one of my biggest influences since college. Totally unforgettable evening,â he says.

Extravisionâs eight-song debut album, âWaking Upâ (available at https://extravisionmusic.bandcamp.com), came out in February and was the culmination of three years of work. He says much of the album was inspired by The War on Drugâs 2014 album âLost in the Dream.â His own resulting album was described by a friend as âhypno-blues.â
âItâs full of energy and spaciousness and that kind of thing,â Stier says of his album. âItâs a malleable music project that sounds different every time you hear it, in a way.â

The genre-bending album falls in line with other artists blurring genre lines, which has been trending in music. Stier notes heâs dabbled in several genres in the past, including folk and hardcore music.

âI think itâs a healthy thing for all artists to try and expand. Thereâs certain things I try to stick to, but I really enjoy evolving,â he says.

This month Stier travels to Iowa City to play at Mission Creek Festival on April 8 and is currently on a nationwide house tour. As the name implies, Stier is playing in actual homes and is not doing a traditional tour of small clubs and bars. He admits that it might not be as financially consistent touring this way, but he finds it more rewarding.

âI really enjoy playing in peopleâs homes. To me itâs a really special, intimate and vulnerable concept because the space itself is a lot smaller, and the crowds tend to be smaller, too. Thatâs something I really enjoy about it. I feel like Iâm able to connect with people much easier,â he says. âTo me itâs a profoundly more meaningful kind of thing.â ♦