Former RNC chair: Reynolds should be in âconversationâ forÂ presidency

And Michael Steele thinks country is in âstaging areaâ for civil war. 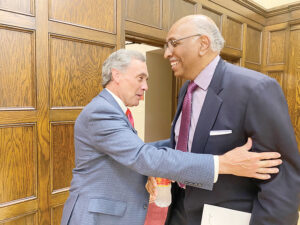 Gov. Kim Reynolds insists a life in Washington is not for her. But Michael Steele, the former chairman of the Republican National Committee and a high-profile political analyst, sees Iowaâs Republican governor as a strong potential candidate for the presidency.

âShe should be in that conversation along with a number of other governors who have served over the last four or eight years,â Steele said.

Steele, the former lieutenant governor of Maryland who is considering a Senate bid in that state and appears regularly on the cable-TV talk circuit, said in an interview with Political Mercury that Reynolds brings a record and style of leadership that could be attractive to Republicans in a post-Trump election â should the former president, who maintains astronomical approval ratings within his party, opt not to run.

âWhy not look at the governor?â Steele asks. âSheâs governed during a difficult time. Some of her decisions may or may not have been controversial or popular, but thatâs all part of the soup. Thatâs how the country gets into its next groove.â

Steele delivered the Manatt-Phelps Lecture in Political Science at Iowa State University on Oct. 28 titled âTrumpism and the Republican Party: Whatâs Next?â The lecture is sponsored by the family of the late Charles Manatt and his wife, Kathleen. Manatt grew up in Audubon and went on to a successful career in the law and politics, becoming the chairman of the Democratic National Committee and U.S. ambassador to the Dominican Republic.

Steele spoke with Political Mercury before his Ames address and responded to questions about the viability of a Reynoldsâ White House bid.

âI actually like that question because, as a party in the recent past, we would focus on talented governors who are serving at the current time and showcase them and let the rest of the country see them in all their glory, if you will â handling a crisis like COVID, dealing with regional issues,â Steele said.

Thatâs the transition the party should be moving toward, he said.

âTypically, former presidents can fade back because the next generation, the next team up, gets out on the field,â Steele said.

Emerging Republicans like Reynolds are overshadowed by the âomnipresentâ Trump, he said.

âWe are sort of blindly following down a road that is ostensibly a dead end,â said Steele, who is a fierce critic of former President Donald Trump. âYou have these other leaders who offer a different pathway and maybe have a different set of ideas,â he said.

For her part, Reynolds, talking with the media this summer, dismissed any speculation that she may opt to follow her close friend, U.S. Sen. Joni Ernst, R-Iowa, to Washington, D.C., by running for the Senate if U.S. Sen. Charles Grassley, R-Iowa, had opted to leave public office, having served in the Statehouse and Congress since 1959.

Would she run for the Senate under any condition?

Reynolds, a former lieutenant governor, ascended to the governorship in 2017 when then-Gov. Terry Branstad accepted President Trumpâs appointment as ambassador to China. She won re-election in her own right in 2018 over Democrat Fred Hubbell.

Trump drew thousands of people from Iowa and other states to a rally at the Iowa State Fairgrounds in Des Moines just weeks ago, an event that had the trappings of a presidential campaign appearance. But Trump has not made a formal announcement on a 2024 bid.

The nation is in a âstaging areaâ for civil war

The general who led the Union through the Civil War predicted what shape a second violent conflict between millions of Americans might take. Steele pointed out that Ulysses S. Grant described the dynamics and climate that could lead to a second civil war during a speech to veterans in Des Moines in 1875.

âIf we are to have another contest in the near future of our national existence, I predict that the dividing line will not be Mason and Dixon, but between patriotism and intelligence on the one side, and superstition, ambition, and ignorance on the other,â Grant, a Republican, said that September Iowa day to the Annual Reunion of the Army of the Tennessee in Des Moines.

Nearly 150 years later, and 30 miles north in Ames, another Republican, Steele, summoned the quote to make a point about toxic and tribal modern politics.

âThe very survival of our democracy and this party is directly and solely connected to our collective answer to the question: Do we still believe in America?â Steele said.

âI and my fellow Republicans cannot heal ourselves of the wounds weâve caused this great nation while clinging on to Donald Trump,â Steele said of the former Republican president.

Asked directly in an interview during his Ames appearance if the United States is in a cold civil war, Steele said, âI think some want us to be. I think some would even argue that we are. I would look at it as the staging area where elements that would go into something like that â the hot rhetoric, the regurgitation of misinformation and disinformation.â

Many Americans who voted for President Trump still feel left behind, even after four years of presidency for a man they supported, Steele said.

Steele has been a leading Republican critic of Trump. Much of his speech centered on criticism of the former president, whom Steele says has sowed deep divisions and worked to diminish important American institutions.

What, if anything, breaks the Trump spell over many Americans?

âIn my talks, I say to people we are where we are because this is where we want to be,â Steele said in the interview. âAnd weâll be here as long as you want us to be here. Weâll look at Jan. 6 and say, âOh it was just another day on Capitol Hill.â Or we will realize what it was, and we will do something about it.â ♦