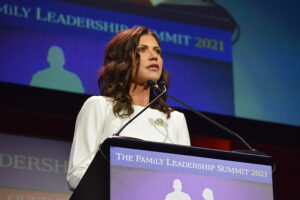 The recent Family Leader Summit in Des Moines served as a one-two punch, and something of a conservative strategy preview of the next two election cycles: hit Democrats on national issues, notably critical race theory on which speaker after speaker made rhetorical hay, while hailing the actions of conservative governors like Iowaâs Kim Reynolds and South Dakotaâs Kristi Noem who favored more openness during the COVID-19 pandemic than other governors and aggressively pushed their anti-abortion agendas in statehouses.

âShe gave the church the keys to the state. Holy Cow!â Greg Baker, vice president for church engagement with The Family Leader, said of Reynolds who is expected to seek re-election in 2022.

Several conservative leaders, including Chuck Hurley, vice president of the Family Leader and one of its long-time lobbyists, say they view the last session of the Iowa Legislature as best in history for their agenda.

âThere hasnât been a more exciting time to fight in decades,â Reynolds said of her anti-abortion position.

In a full day of messaging, Noem stood out as she worked her way to the close of a speech â in which she led an earnest audience in singing âThe Battle Hymn Of The Republicâ (what the governor says is her favorite song) â before more than 1,200 people, including 200 pastors who attended the Family Leader Summit at the Community Choice Credit Union Convention Center.

âI really hate, I hate this America that weâre giving her,â Noem said of her granddaughter. âI donât recognize the country I had the opportunity to grow up in. I just donât. When I grew up, people were proud to have a job. They werenât confused on the difference between boys and girls. We prayed in schools.â

Noem said the United States does not suffer from systemic racism.

âWe do not have hatred and racism in our DNA,â she said.

Noem said South Dakota did one week of advertising in the wake of civil unrest in 2020 in Minneapolis to make the case South Dakota was a more hospitable place for police officers to serve. As a result, the state had inquiries from 900 police officers interested in moving there from 41 states, she said.

In a press gaggle with CITYVIEW and other media, Noem showed star quality, an ability to charm and disarm. She relished the back and forth with the media â and sheâs good at it, next-level in fact.

From a stage, Noem brings a luminous quality. We posted videos of Pence and former Secretary of State Mike Pompeo. Noemâs video crushed the other two â men who were close in line to the presidency for years â in viewership. Read that for what it is. Optics matter in American politics. Barack Obama brought much of the same sort of base-driving energy and atmospherics to his politics as a young, attractive candidate.

Noem, a 49-year-old governor â and new grandmother as of five weeks ago â is supremely telegenic and wonderfully folksy, smart and unapologetic and skilled at parrying questions from the media aimed at getting a big reveal, or at least a little trip. And she is from neighboring South Dakota â and a favorite of Iowa Gov. Kim Reynolds, who Noem said invited her to speak in Iowa.

In other words: Noem is a contender in the Iowa Republican presidential caucuses for the 2024 cycle unless former President Donald Trump big foots the contest.

So is she running?

âOh, for goodness sakes, Iâm going to run for re-election for governor,â Noem told CITYVIEW of 2022. Her re-election is almost assured while setting the stage for a presidential race.

Noem, who ran a hunting lodge and restaurant, has been a farmer and a rancher (and the former lone congresswoman from South Dakota). And she had other jobs.

âI sold vacuum cleaners, yes I did,â she said in the speech. âI still to this day can tell you the best one you should get. And I sold carpet cleaning over the phone, which apparently, I was incredible at, so there you go if you need your carpets cleaned.â

We asked Noem, an ardent opponent of abortion, what she thinks the penalty should be for a woman who has an abortion or a physician who performs one if her view prevails.

âI think it should be outlawed,â Noem said. âRoe v Wade I think is a stain on this countryâs history. We can have those debates when we get to that point. What we have done strategically for many years is continue to build the case and push litigation and state levels continue to build a case where it could be that we overturn Roe v Wade.â

Noem said she has one person in the chief executiveâs office in South Dakota whose sole mission is to serve as a âpro-lifeâ advocate âthat gets up every day just focused on how we can defend life.â

For his part, Pence elicited some of the most sustained applause during the summit with a rebuke of critical race theory â an approach to teaching and culture many see as balanced for pointing out historical and systemic racism, but others view as political correctness, a revisionist overreach aimed at making white students feel guilty.

He said âpatriotic educationâ is essential to the survival of the nation.

âInstead of teaching all our children to be proud of their country, critical race theory teaches children as young as kindergarten to be ashamed of their skin color,â Pence said. âCritical race theory is state-sanctioned racism, pure and simple, and it should be opposed by every American every day.â

Noem weighed in as well during the news conference outside the event ballroom.

âAs long as I am governor, I am going to continue to fight critical race theory in the State of South Dakota,â Noem said. ♦