âAll you see is their eyesâ 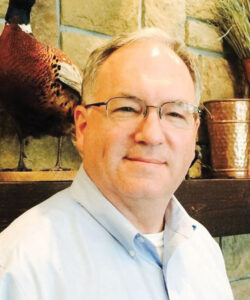 He knew them by their eyes. Thatâs about all Wiltsie Cretsinger of Coon Rapids could see of the physicians and nurses who shepherded him through a brutal, 21-day, take-his-breath-away fight with COVID-19 at St. Anthony Regional Hospital in Carroll.

The medical professionals there were all âgowned upâ with two sets of gloves, masks, hair coverings and shields, said Cretsinger, the 61-year-old co-owner of Coon Rapids-based Heritage Insurance & Real Estate.

âAll you see is their eyes,â Cretsinger said. âI got to know them by their caring eyes. I could see their souls. These people are caring people. They work hard. St. Anthony doesnât just have people who come in and take your blood. They come in and they put a warm blanket on you, and they care about you.â

Cretsinger, who now is recovering at home, thinks about all those kind sets of eyes that labored over him. They keep coming back to him following his Oct. 23 release from the hospital. The memory provides sustaining comfort as he works to get his breath and energy back.

âThat just made a big impression to me,â Cretsinger said. âYou know, if you are there long enough, you have all these different nurses that come in at different hours and different stages, different ages. You get to know them real well, but you donât know their names all the time. They gown up every time they come in the room.â

Cretsinger always considered himself a picture of health and hard work, and he admits to not taking enough precautions from the virus, which is why he told me he wants to frame his journey and recovery as something of a cautionary tale.

âI took COVID lightly, probably more lightly than I should have,â Cretsinger said. âIâll be up front on that.â

Cretsinger, who serves as Iowa Republican Congressman Steve Kingâs district director, is outgoing and engaging. He just kept up that approach as the virus hit. He didnât think much of the usual handshakes and occasional hugs.

Cretsinger doesnât know where he contracted the virus. He helped a son grind corn on the family farm south of Coon Rapids in Guthrie County for five hours straight one day in late September. The virus hit the next day.

âThat night, it was a Saturday night, and I started coughing really bad, and I thought, well, it is corn dust,â he said. âBut it got so bad that I passed out at home.â

His wife, Mary, got him to St. Anthony. Physicians first discovered pneumonia. Then he tested positive for the coronavirus.

Cretsinger spent seven days in the hospital. Then he went home for three days. The virus boomeranged.

âI had the chills,â he said. âActually, I thought I was going to freeze right where I was at. Iâve never experienced chills as bad as I had. And I had a lot of body aches.â

He went back to St. Anthony for 14 days.

Cretsinger explained to his four grown sons â Jonathan, Ethan, Gavin and Stuart â that he felt like he was drowning.

âI was really anxious over the fact I couldnât breathe,â he said. âI canât remember the last time I was in a hospital, and I never go to a doctor. I was never really concerned I was going to die. It was like, whatâs going on here?â

King reached out regularly to check on Cretsinger, a respected and well-liked surrogate for King in the small towns of western and central Iowa where the real-estate man with a farm background knows agriculture and small business.

âHe called my wife about every day,â said Cretsinger, who has worked for King for six years and will depart that role as the congressman leaves office at the end of the year to make way for U.S. Rep.-elect Randy Feenstra, R-Hull.

Cretsinger, who received that treatment initially, didnât need it when he left the hospital, he said. But Dr. Kyle Ulveling, St. Anthonyâs medical director, while not discussing the specifics of any individual patientâs situation, did confirm that King played a key role in connecting St. Anthony with the clinical trial.

âI was only comfortable if we were going to be able to do this for anybody who comes in to St. Anthony, not just people who know people, and the congressman was totally OK with this,â Ulveling said.

Kingâs call was for the benefit of the full St. Anthony service area, Cretsinger said.

Cretsinger had no underlying conditions and didnât think the coronavirus would hit him. So he would go to functions, restaurants and receptions, without wearing a mask, he said, scolding himself during the interview for not acting differently earlier.

âIf three-fourths of the people werenât wearing a mask, I wouldnât wear a mask,â Cretsinger said. âI just didnât take it serious, and I do think we need to take it more seriously. We do need to wear masks. We do need to be smart. You donât have to be real old to have this thing knock you down a couple of pegs. Iâm not big on mandates, but I think people need to be more encouraging of wearing masks. If you didnât take it seriously, take it more serious than you did before.â ♦