He saved us from deadly defective products 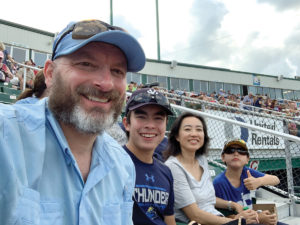 Elliot Kaye, a commissioner with the Consumer Product Safety Commission, is pictured with his wife, Kanae, and two sons, Noah (left) and Ethan. (Submitted photo)

Walk a box store or surf a retailerâs website with one of our nationâs top product safety advocates, and youâll see some of the horrors heâs dedicated a professional life to removing from the seemingly, but often deceivingly, safe shelves from which Americans grab the stuff of quick errands or big birthday bashes.

In Bethesda, Maryland, at a government building not far from the Metro stop, Elliot Kaye, often fighting back a fatherâs tears when infant-death narratives emerge, reviews reports on fatalities around our nation tied to defective products and faulty services.

Kaye, a commissioner with the national Consumer Product Safety Commission, and its former chairman under President Obama, thinks about the packaging around batteries small enough for children to swallow and the stringy-strandy window blinds behind the tragic deaths of restless, wall-climbing toddlers who fatally tangle themselves in what their parents bought with only decorative allure in mind.

What we look innocently past in the rush of daily life catches Elliotâs thoughtful, knowing eyes. He thinks about these things so we donât drive ourselves crazy thinking about them.

Elliot is on the hunt for the hidden risks of life in an increasingly consumerist culture. Heâs one of the people who makes a simple purchase of a crib or a portable generator just that â simple and safe, not a familyâs worst nightmare.

Iâve walked aisles in name-brand stores with my close friend Elliot as heâs pointed out the good (some battery companies worked behind the scenes to tighten those packages) to the bad (defiant profiteering corporations who blame consumers for unstable dressers falling on and killing their children).

Iâm a small-town Iowa newspaperman who has spent his life seeking to ferret out truth. Elliot takes public service a step further: He finds the truth about the things in our homes that are killing us and does something about it.

For 34 years, Elliotâs life and mine have intersected, and how fortunate I have been â from the campus of Northwestern University, our alma mater, to Florida, where we both worked as interns for newspapers (and covered power boat racing and Minor League baseball and all manner and variety of wild âFlorida manâ stories), to Washington, D.C., where Elliot and I worked on Capitol Hill and did our best for the people of Florida, Iowa, Missouri and Massachusetts (the home states of the congressmen and women and senators for whom we worked).

Elliot Kaye is family to me. I was his best man. He flew halfway across the nation to attend the funeral of my late uncle, a hard-drinking, chain-smoking, uncompromising Republican who insisted that Elliot serve as one of his pallbearers â walking on the left side of the casket, of course.

More Americans really ought to test-drive rural-urban friendships â the Methodist kid from Carroll, Iowa, and the Jewish boy from Long Island, can become as close as brothers.

America, I think, would be better if there were more cross-country friendships like that one Elliot and I formed in 1987. Of course, there is only one Elliot.

We are competitive people who, interestingly and wonderfully, have not been competitive with each other.

And we have been close all these years. Geography be damned.

Elliotâs wife, Kanae, thinks Iâm lying when I tell her that you can drive on paved roads in the part of the country Iâm from for 30 minutes sometimes without seeing any other cars.

I learned to love New York City and the traditions of Elliotâs family, and especially his late mother, who possessed a distinct style of lively wit Iâve yet to encounter again.

Now Iâm writing from the dusty offices of our old newspaper here in rural western Iowa to make an appeal for my old friend.

You see, Elliot found a faulty product of the worst variety, one inhabiting his body. Elliot, who has risen from bed for thousands of days with your health in mind, the urgency of seeing to it that what we buy doesnât kill or maim us, or worse, hurt our children, needs one of us to step forward with an organ donation so he can continue to do what he does for our families. Heâs 51. Too young for a career of surpassing public-mindedness to end, and too soon for him to be ripped by medical caprice from his wife, Kanae, and sons, Noah and Ethan.

If you knew him, you would, too.

So please, if you are inspired by his story, consider donating a kidney. Elliot is listed for transplant with the prestigious Georgetown University Hospital for this medical endeavor.

The professionals there do a wonderful job of screening potential donors and making your life-saving/changing experience as comfortable as possible. The best part is the donation process has advanced so much that they can make a kidney donation work even if the donor lives halfway across the country and cannot ever make it to Georgetown for the testing or the procedure.

Several of his family and friends have gone through the early protocols to see if they can donate; more are doing so. But time is of the essence. Not all people can donate, of course, but many, many can.

Please click on Georgetownâs kidney donation site, let me know you want to help Elliot Kaye and initiate the process to see if you are suitable donor: https://mgti.donorscreen.org/register/donate-kidney.

Or you can reach out directly to me for more information or a conversation at douglaswburns@hotmail.com. ♦