In Steve Kingâs Iowa, white women need to be pregnant â like all the time 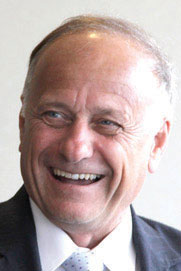 Carroll County has a 1.9 percent unemployment rate, and over in Greene County, that number has dipped to an all-time low, a 1.8 percent jobless figure economic-development leaders are terming âsillyâ and âdesperate.â

The jobs are here. The people to fill them arenât.

We recently had one employer ask to run a job listing with but a single qualification: âApplicant must have teeth.â He was serious. We didnât run it, of course. The classified employment section is hardly the place for jokes these days. We are in dire need of workers at all skill levels in Carroll and Greene counties.

Into this people-depleted environment steps U.S. Rep. Steve King, the modern eugenicist, the Mad Philosopher King from Kiron, with his 1930s brand of racial sorting.

âDiversity is not our strength,â King, the Republican congressman representing much of western Iowa and all of the 19th century, posted on Twitter earlier this month. âHungarian Prime Minister Victor Orban, âMixing cultures will not lead to a higher quality of life but a lower one.â â

Inspired by Hungary â a phrase said by no American ever until the congressmanâs Dec. 8 tweet â King no doubt has some craniometric instruments squirreled away in the back shed out in Sac County for the measuring of human heads, you know, to show white people are smarter using science discredited in every corner of the United States except Kingâs color-obsessed mind.

With the Gospel of King in full legislative effect, the Mexicans deported, and the blacks forever pulled over on the side of our western Iowa highways by ready-to-fire police, white people are going to have to jack boot to the call of Genesis 9:7 â âAnd you, be fruitful and multiply.â

The El Salvadorans arenât around to pick up the slack anymore, in Kingâs Iowa. And the robots arenât here yet.
So get crackinâ crackers. Needle the condoms and spit out the pills. Bring the âHandmaidâs Taleâ from Hulu to the bedrooms of Boone.

White women should shoot for 20 kids, the number born (in single birth, no twins) to the late German Lutheran immigrants Jans and Elizabeth Peters.

At the family farm north of Glidden, to cycle all the kids through dinner in the 1920s and 1930s, the Peters family would allow the oldest and youngest to eat first, with the rest of the clan serving the meal. The line for baths could start on a Saturday and stretch well into Sunday.

Jans and Elizabeth Peters emigrated on the steamship Necker from Hamburg, Germany, to the United States in May 1901 â already with four children. Elizabeth had her first son, Derk in 1897 at age 20 or 21. She would bear her last child 27 years later in Carroll County in 1924, at age 47 or 48.

Mrs. White Iowan, resurrect that approach to reproduction. This is now your life, too.

Our congressman needs you pregnant for at least one-fifth of your life. With modern medicine, perhaps even more.
So shed those holiday pounds, rev up your man, and letâs get the production rolling. Think of your womb like a World War II airplane assembly line in Detroit.

And donât think of your kids as just kids. They are soldiers in Steve Kingâs cultural army. From Mapleton to Mason City a sea of whiteness, like Sherman marching to Atlanta, will roll from our fields and prairies into grand bland cities of western and central Iowa in a celebration of blinding similarity.

Take it from King. Once youâve seen Hungary, thereâs no going back to Sioux City or Denison or Storm Lake.
Crania Americana! ♦