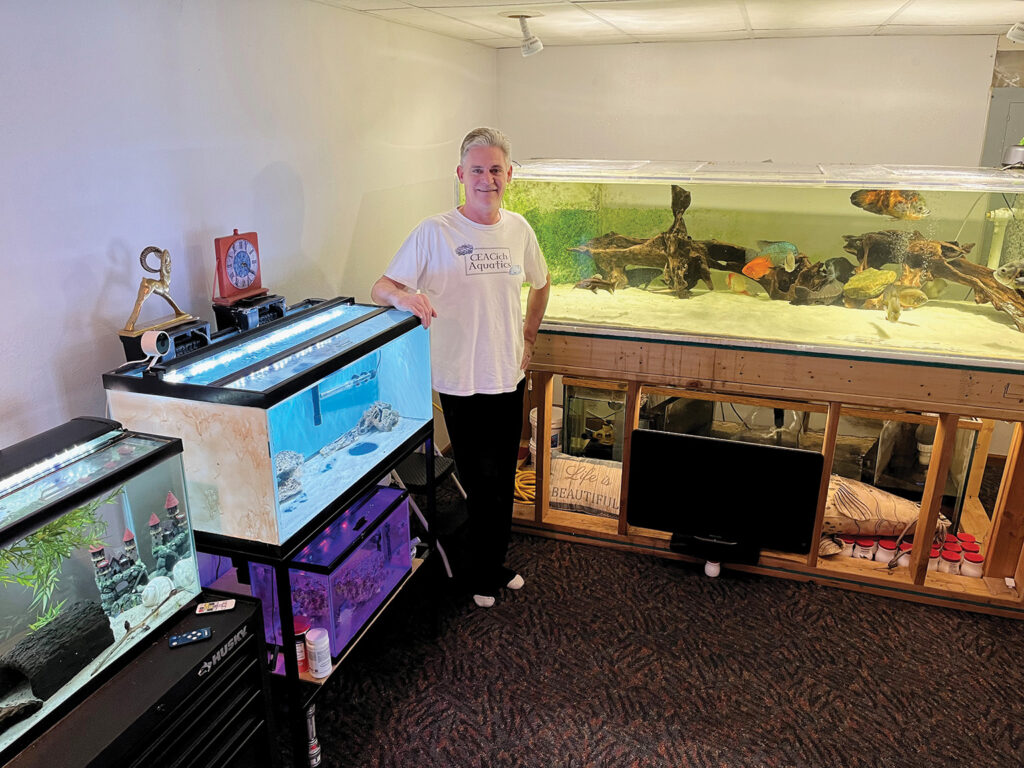 Freshwater fish from around the globe populate the 6,000-pound tank of Steven Wood.

From a 20-gallon to a 480-gallon tank, 200 fish in seven different aquariums have found a home in Steven Woodâs basement. A custom-built 480-gallon tank sits 8 feet long and 4 feet wide, and the 240-gallon filtering system underneath keeps the fish alive. Overall, the fish tank, sand and water weigh roughly the same as a pickup truck â about 6,000 pounds.

The freshwater fish are from all over the world. His two pair of Buffalo head fish mate for life. His oldest fish, Hank, is 15 years old.

Wood obtained his first fish when he was 4 years old â a goldfish, which was the prize for winning a bottle toss game at a fair.

But his fascination with fish did. While attending law school, Woodâs passion continued as he worked at a fish store called Splashbacks in Omaha. He obtained a grant to have wild-caught fish flown to the U.S. through a captive breeding program. Designed to help endangered fish from Malawi and Tanzania, he bred them and returned the juvenile fish to Africa for reintroduction into the wild. 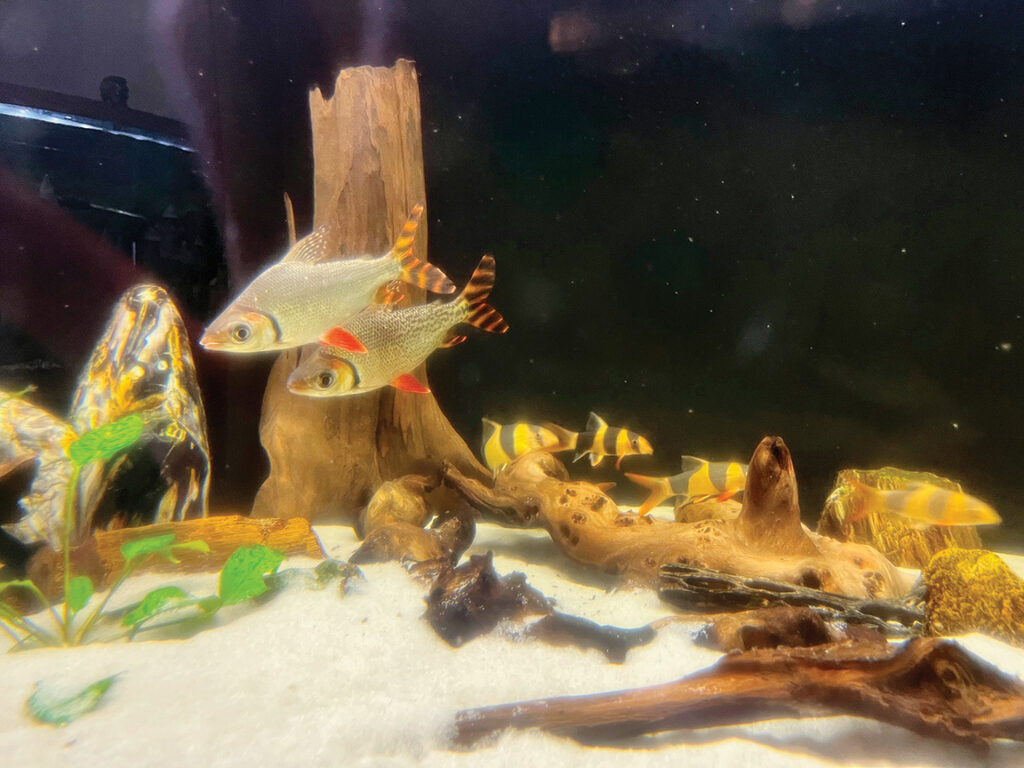 Once the grant money disappeared, he closed up shop, as he couldnât sell endangered fish. He then helped establish a fish club in the 1980s, which was located at the Iowa State Fairgrounds.

Membership waned as the Internet took off. In 2016, he reestablished a new club, CEA Cichlids Aquatics (Corals, Exotics, Africans). Cichlid is a family of freshwater fish with about 3,000 different species. He serves on the board of directors with the non-profit aquarium society.

To keep his freshwater fish, all the plants in his tank are live. 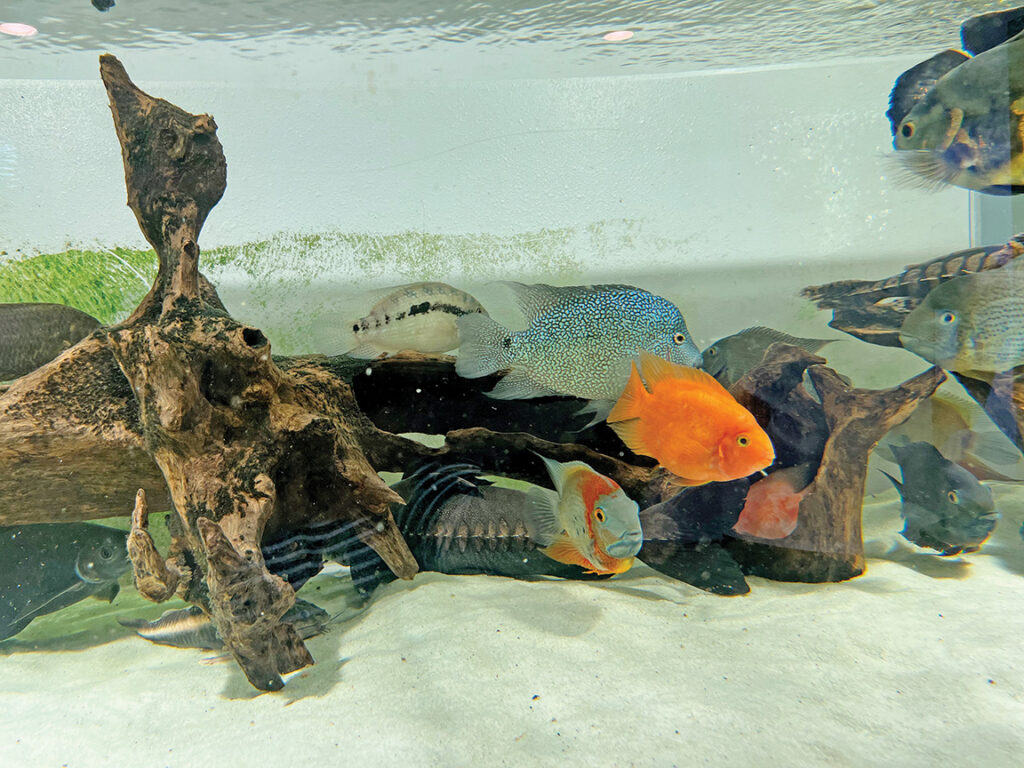 Keeping his basement at 70 degrees is less costly than heating all the separate tanks. When he first moved into his home, a walkout basement and a concrete slab to hold the weight of the fish tanks were top priorities. He is diligent about preventing power outages with generators and has battery backups.

âI have lots of safeguards in place,â he says. âIâve flooded about four basements because of power outages.â

Other favorite fish include a clown loach, a black-and-orange fish that grows just 1 inch per year and wonât be mature until it is 12, and a bucktooth that specializes in eating fish scales. The most he has personally paid for a fish is $400 for a stingray, but some fish will go for up to $10,000. He once kept a 27-inch arowana that was a âjumper.â

âIt jumped through the lid and broke its back,â he says.

With a warm basement, Wood empties six gallons of water each day from his dehumidifier. Some fish get into fights over space and food. The fish swim toward Wood as he approaches the tank. His three cats tend to ignore the fish, although one gets jealous when Wood spends time at the tanks.

Over the years, heâs figured out how to reproduce the fishâs natural environment so they thrive.

âThe fish are a reflection of your effort â a type of stewardship. They are completely dependent on care with the water and the air they breathe.â ♦