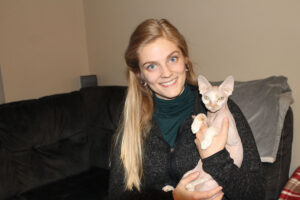 Sai doesnât look like a typical cat. There is no tiger stripe, tuxedo or calico cat look, nor does he have soft fur. Instead, his huge triangle-shaped ears sit atop his angular face, while his wrinkled skin resembles an aging manâs bald head. Sai is a sphynx cat, also known as a hairless cat.

The catâs owner, Emily Schultz, obtained the male feline from Craigslist as she was intrigued with the breed. Sphynx cats were specially bred in 1966, and the breed was originally named Canadian Hairless. Many folks mistakenly believe the cats came from Egypt, but that isnât correct. They merely resemble cats perched on ancient Egyptian statues.

Schultz initially thought a hairless cat might have less shedding and clean up. However, it turns out that these cats are more work than a regular furry cat.

Schultz frequently trims his claws. Without the protection of fur covering the body, heâs prone to infection from scratching.

She bathes him at least once a month since he is naturally oily and sweaty. Most cats are meticulous groomers with their tongues, however Sai has numerous knots in his skin from biting at his skin folds. Heâs had most of his teeth pulled.

âThe maintenance and vet bills are high,â she says.

Despite his upkeep, heâs a cuddler and likes being wrapped like a baby. His daily ritual includes finding heat sources. He nuzzles up in a mound of blankets, finds his special heated pet pad or discovers a ray of sun streaming in the window.

Schultz says that when people first meet Sai, they are surprised at how soft he is. âItâs like petting a peach,â she says.

âHe was in it for three hours and loves meeting new people,â she says.

Now that Schultz is working from home, he sits on her lap or computer â whatever is the warmest spot, as heâs constantly seeking human companionship.

âHeâs very needy and friendly,â she says. âHe has to be next to someone at all times.â

Schultz is familiar with the reference to the Austin Powers movies where Mike Myersâ character, Dr. Evil, has a sphynx cat called Mr. Bigglesworth.

She also has a ânormalâ cat, Ciri, in the household. However, Sai prefers humans and gets irritated when Ciri wants to cuddle or lick him.

Sai loves car rides and starts purring the minute heâs in the car. With a hearty appetite, he licks human plates clean and muscles his way around the kitchen to obtain food.

âHeâs hyper food oriented, but he never gains weight. Heâs always skinny no matter what I feed him,â she says.

Schultz likes having Sai around.

âHeâs so friendly and quirky,â she says. âHeâs always in your business. Heâs a fun cat.â ♦