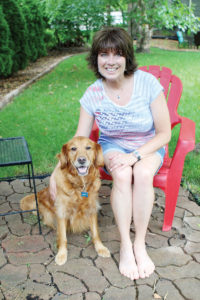 Deb Davis is pictured above with her Golden Retriever named Abby. The dog was rescued from a puppy mill and has blossomed in Davisâ care. A tattoo on Abbyâs ear (seen below) remains from the canineâs previous owner. Photos by Jackie Wilson

When Deb Davis was viewing the Iowa Golden Retriever Rescue (IGRR) site online, she noticed a new foster care dog that was looking for an adoptive family.

The dogâs name was Abby, which was the same name of Davisâ first golden retriever, which she had also rescued.

But Davis wasnât looking for a dog, since sheâd just put down her black lab. However, the IGRR arranged a meeting, and, once Davis met Abby, she knew it was fate that she would care for another golden with the same name.

At the foster home meeting, Abby was fearful.

âShe walked to us slowly and startled easily,â remembers Davis. âI felt like she needed our love.â

Davis knew Abby needed time getting used to being around humans. The dog hadnât been socialized, only living in a kennel. As a puppy mill mama, it was her job to breed puppies.

âShe was afraid of everything,â Davis explains. âShe wouldnât walk in our house, as sheâd never lived in a house before.â

Day by day, a transformation occurred. Abby used to be afraid of anything new, yet Davis lovingly and patiently worked with her, encouraging and rewarding her for good behavior. She credits it to being loved.

âAs we loved her, she started coming out of her shell,â she says. âItâs a testimony of what love can do in a dogâs life. It reminds me of people. When people are hurt from their past, love can heal them, too. The love of Jesus heals.â

Out on walks, Abby was hesitant at first of other dogs and people. Yet the more they walked, the better she acclimated to her surroundings.

âShe really began to blossom,â says Davis. âShe now loves people and dogs. She especially loves puppies. I think because she was a mom to so many puppies.â

Davis has noticed one disturbing thing while petting Abby. She found a tattoo on her inner ear with the number â2.â It was used to identify her in the puppy mill.

âIt was so sad to see that,â she says. âItâs like a tattoo from someone in a concentration camp.â

The last four dogs Davis has rescued have been older, whereas Abby is just 4.

âI wanted a younger dog,â she explains. âIâd put down three dogs in five years. It was hard to imagine doing that again.â

When Davis gets home, Abby enthusiastically greets her, putting a smile on her face. It has forced Davis to walk and keep healthy with exercise.

She recommends fostering or adopting all ages of dogs.