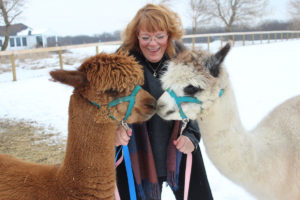 Stanley and Prima cuddle together.

For more than a dozen years, Luanne Sellner would visit the animal barns at the Iowa State Fair and dream of owning her own llama or alpaca.

Yet her Pleasant Hill home wasnât exactly alpaca-friendly, and she soon located an acreage outside of Van Meter. Luanne built herself a new home with a small barn and bought three alpacas. Shortly after that, she added three more to her brood, including three pregnant alpacas.

âThey arenât just momâs alpacas,â she says. âTheyâre part of the family. Naming them was half the fun.â

Her daughter named one Ziggy, because of her love of reggae music. Her son played hockey and named one Stanley. Another daughter named one Prima, after a prissy prima donna. Her brother named a powdered-sugar-colored alpaca, Beignet after the New Orleans treat. Since two kids live in Las Vegas, she named one Vegas. The last one was named Dave, after her real estate agent who found her the property.

So, what do you do with an alpaca?

âTheyâre cuddly and cute,â says Luanne. âIt reduces stress for me to go and play with them. Theyâre easier than a dog because you donât have to let them out all the time.â

The social pack animals, natives of Peru, stay together in the barn. Their 3-inch thick fur protects from the elements. A certain pecking order appears, especially if one is eating out of anotherâs food trough.

âOne time the alpha alpaca was screaming, and we didnât know why,â she says. âThey all stood looking in the same direction. Later I figured out she saw something in the distance and tried to alert the others.â

Sheâs learned alpaca behavior from a breeder at Triple Tree farm in Sheldon, where she received her alpacas.

The alpacas were used as props in her daughterâs wedding and donned flower wreaths around their necks. At Christmas, she put antlers on several of the alpacas and mailed out Christmas cards with their pictures. One person responded, saying, âI didnât know alpacas had antlers.â Another young neighbor asked if she could pet her giraffe.

She welcomes friends who want to snap selfies with the alpacas. She says her 6 year-old grandson is the âalpaca whispererâ and hops over the fence to wrangle them.

In the spring sheâll shear the fiber (fur) and send it out to make into yarn or fabric. Sheâs checked Pinterest for stylish hairstyle ideas, such as a mop-top or a mullet.

Sheâs leash-training them to take them on photo shoots. When the cria (baby alpacas) are born, she hopes to train them as therapy animals and visit hospitals or schools. âI think itâd be a great retirement job,â she says. ♦