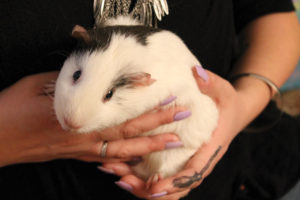 Cassidy Dixon is a self-described animal lover, so it comes as no surprise to her that, in her late-20s, she is a first-time guinea pig owner.

âWe were always kind of a dog family, but dogs are harder to have in an apartment, and my son really wanted a pet,â Dixon explains. âTheyâre [guniea pigs] a great pet to have, and I think theyâre definitely underrated.â 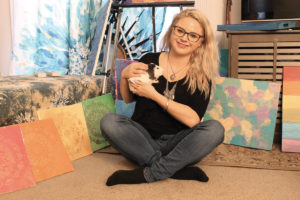 On a mission to find the perfect apartment pet for their West Des Moines dwelling, a year ago, Dixon and her 7-year-old son, Kalijha, wandered around PetSmart together before deciding a guinea pig would be their new family addition. They later mutually decided on the name Bubbles.

Will there be more guinea pigs to complete âThe Powerpuff Girlsâ trio?

âWeâll probably wait until weâre in a house to expand the guinea pig family,â she says.

Similar to most small animals, Bubblesâ diet consists mostly of pellets and water, but Dixon likes to mix it up with cabbage and carrots. For treats, Bubblesâ favorites are bird treats with seed, a honey core and peanut butter.

âJust to supplement the pellets because theyâre pretty lame and boring,â she says.
Although technically in the rodent family, guinea pigs â of which there are 13 different breeds â arenât skittish or mean, says Dixon.

âI think hamsters and gerbils are more of the scurry-around-crazy kind,â she says of the common misconception.

âItâs just like a baby,â she says. âYou can tell the different noises, sad versus happy.â

âThey love to snuggle; theyâre big snugglers,â Dixon adds, and says Bubbles also likes to cuddle up to her by burrowing in her hair.

Bubbles is even content to be toted around by Dixon in a book bag her little sister made in a home economics class at Valley High School.

In an apartment complex, pets can be hard to come by, and Dixon says Bubbles is âthe neighborhood excitement.â

During summer break, sheâll have up to 15 kids in her home wanting to play with Bubbles. Some get over zealous and want to take Bubbles home.

âI love having the house where all the kids come. Itâs nice, I donât mind it at all, but I definitely mind when theyâre all trying to steal my pet,â she laughs. ♦