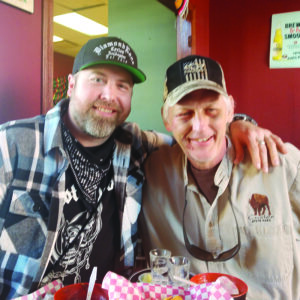 Brothers Cody and Troy Trostel got caught up during a recent visit. Cody is a deep sea fisherman and is looking to market fresh fish in the area. Troy is head chef at Davidâs Milwaukee Grill in Perryâs famous Hotel Pattee.

Troy and Cody Trostel are the sons of my late friend Paul Trostel, who owned nine trendsetting central Iowa restaurants. Troy is currently the head chef at Davidâs Milwaukee Grill in Perryâs famous Hotel Pattee. Cody is a deep sea fisherman in Rhode Island. Cody was back in town recently to visit his brother and to set up contacts in Des Moines for a new business idea. We asked them to lunch, and they chose La Familia, a family-owned taqueria at Sixth and College.

La Familia is a Mexico City style cafÃ©, a bit different from most other Mexican places in town that are more apt to feature the cuisines of Jalisco, Michoacan, Aguascalientes or Sonora.  La Familiaâs stars are ahogados â sandwiches, tacos, huaraches, sopes, burritos, chilaquiles and quesadillas can be ordered dipped in guajillo sauce and then fried. Also rare around here, consommÃ©s of lamb and beef can be ordered, turning sandwiches and tacos into virtual French dips. Over tacos of tongue, beef cheeks, chorizo, pastor, barbacoa, birria and carne asada with consommÃ©s, plus beers, micheladas, cantaritos and shots of Patron, we caught up on things.

âI left the family business completely when I moved to Rhode Island to fish,â said Cody.

âI opened Broken Arrow in Earlham, on my own. I wanted to do something for my family. I spent and borrowed a lot of money getting it ready to go and opened up two days before it was ordered shut down because of COVID. I never really got open at all, mostly just pick-up orders. I was without help. I was cook, host, dishwasher, server and janitor. I lost everything â my family, my stake in Greenbriar, my house, my truck, my relationship with Suzanne (his partner at Greenbriar) and my marriage.  Earlham is a hard town to make a restaurant work. At least it was for me. Life is an adventure. You live and you learn,â Troy explained.

âI always wanted to be a fisherman.â

âHell, when he was a little kid in Point Loma, you couldnât keep him out of the water,â added Troy, who is 18 years older.

What kind of fish does the fisherman fish?

âMostly I go for bigeye, yellowfin and bluefin (tunas). I fish for squid, and I use live squid as bait. I have fished mahi, scallops and marlin,â Cody said.

His photo was on the cover of a shark fishing magazine.

âOh yeah. That was fun. I won a regional shark fishing competition, not a world championship. That was off Montauk, which was cool because that is where Frank Mundus came from. Frank was the larger-than-life shark fisherman who was the inspiration for the Captain Quint character in âJaws.â  âJawsâ was made in Long Island and more so in Marthaâs Vineyard because it wasnât as crowded as Long Island. There is still a bar in Montauk that celebrates Frank,â he said.

What is the biggest fish heâs caught?

How long does it take?

âSometimes we will have fish fighting for seven and a half hours, then get away. Those are the worst days. No one says a single word on the way home.â

Does Cody travel to fish, too?

âYeah, I like to fish Panama, Ecuador, The Great Barrier Reef, Hawaii, Florida. Usually, though, I fish off Port Judith, Chatham and Cape Cod.â

Is Troy doing anything new at the Hotel Pattee?

âNot too much. I just cook things my way. The hotel knows what works. After 30 years at the Greenbriar, I have my own way of cooking a steak, making a creamy Parmesan, etc.,â Troy explained.

What is popular at the Pattee now?

âBrunch is busy on Sundays. We serve a lot of sliced tenderloin, two meat loafs. Steak de Burgo at dinner. Pork tenderloins and steakburgers do well,â he said, adding that the restaurant is open again every day for three meals.

What brought Cody back to Des Moines this time?

âI was talking to Troy and just decided I had to go see him. I got in my truck and drove straight through. Well, almost. I forgot to check the weather and got waylaid for a few hours by an ice storm in the Pennsylvania mountains. I can stay a few days this time. I just have to be back for Valentineâs Day. My daughter is 4 now, and she is aware of those things,â Cody added.

âMy brother is nothing but trouble. Fortunately, his daughter keeps him grounded,â added Troy.

There is a new business idea looming?

âAbsolutely. My business is at the mercy of the big fishing boats, with huge nets and big hauls. If I get back to dock before they do, I might sell a fish for $3,000. If they unload before me, that same fish might only be worth $900. That is not sustainable. I am opening my own poke food truck in Rhode Island to sell fresh tuna and other fish, raw and cooked. I am making contacts in Des Moines to air freight my fish to sushi shops and upscale seafood restaurants in Iowa,â Cody explained.

How is the sushi scene in Des Moines?

âI am really impressed with the quality of the fish. Went to Miyabi 9 yesterday; it was great,â he said.

What else about Des Moines seems different?

âEvery time I come back, I am impressed with the changes. There are so many good places downtown to drink and eat. I love Bellhop and Coa Cantina in East Village. In Boston, you cannot go out to eat or drink without showing vaccine cards. Des Moines is refreshing. Also, in Rhode Island, we donât have much good Mexican food. Itâs mostly Guatemalan.â

âI live in Perry now, and there is a good Mexican restaurant on almost every corner. This place (La Familia), though, is really special.â ♦