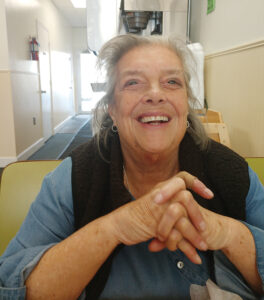 Dr. Claudia Addy is a podiatrist who has also worked at the Great Ape Trust and run for U.S. Senate, U.S. House, and the Iowa House. Currently she works for an auto salvage yard and for Wells Fargo Arena. We asked her to lunch recently, and she chose Manhattan Deli, the most requested lunch spot in the five years we have been doing these interviews.

Under new owners since COVID-19 changed everything, the deli looks a lot more Manhattan now with subway signs, photos and artwork that reflects The Big Apple. The deli is known for huge sandwiches, and it seemed like they might now be bigger than ever. They also occasionally feature lobster rolls that are sourced from New England and have a large following of fans.

Fox has a popular new series called âThe Cleaning Lady.â Based on an Argentine telenovela, it features a gorgeous young Cambodian doctor who moves illegally to Las Vegas to get life-saving surgery for her son. She takes a job as a maid in a large casino and befriends a mobster with her medical skills. We asked Addy if she knew about this. âOh, yes, I love South American melodrama. Iâve read all of Jorge Amado, Gabriel Garcia Marquez, Isabel Allende, etc. I like the character because I am a doctor who now works for an auto salvage yard.â

How did she happen to choose podiatry? That isnât usually the medical profession that little kids grow up pretending to be.

âThat department recruited the hell out of me. I was in scientific research as an undergrad, but to make a living in research you are dependent upon grants. I had been working with Ulf Karlson, who had worked with Sjostand, who was one of the first people ever to discover mitochondrial DNA. The electron microscope was in its early stages then. It was an exciting time â we were naming things for the first time.

âWe worked on a case with the Dental College on cleft palate wound healing. The theory was that there were contractile protein cells floating around that could be stimulated to do other things. Ulf was one of the first to think about stem cell research. Unfortunately, we had to hurt some beagles to get the cells we needed.

âAt any rate, I was not getting offers to go into neurosurgery, and the podiatry department wanted me. I owned property in Iowa City at the time, so it was convenient. I didnât have to move to go to med school. I did four years in med school â two in didactics and then two in practical. I went to Tacoma for my last year. Then I moved to Key Peninsula north of Seattle and worked 20 years at Key Center Clinic,â she explained.

Then she returned to Iowa?

âPodiatry is hard physical work. My shoulders were wrecked. I couldnât even turn a doorknob. All the repetition got me. If you canât work a full load, you canât make money in medicine, the costs of maintaining a practice are so high with insurance and staffing and labs, etc. I came here to have Dr. Gallus do my surgery. I was a lousy patient, though. I didnât do the physical therapy,â she said.

So what came next?

âI heard that the Great Ape Trust needed volunteers. This was right after the original benefactor had pulled out and the place didnât even have money to feed the apes. I drove every day to Hy-Vee, Gateway Market and Campbellâs, who were really generous to us. They donated so much food. I cooked for the apes, three meals a day. My kitchen looked out on the apesâ sleeping area. A couple apes liked to watch me cook. They slept under big green blankets, and I loved it when a head popped out of the blanket to watch me cook breakfast. Those apes loved chocolate milk more than anything,â Addy added.

So, what became of the Great Ape Trust?

âIt had no chance without the money needed. I spoke to City Council to try to get some help, but then that place flooded, and it seemed like the insurance premiums must have been missed because there was no insurance to cover the cost. Sue Savage-Rumbaugh and her sister and brother-in-law were the only people there when I started, and it takes a lot of people to take care of apes. Plus, all three of us women had crippling medical issues. We kept it going another year. By then I had recruited enough volunteers that they didnât need me. And I was burned out. I read online that the apes are now in the Democratic Republic of the Congo. One of the bonobos, though, has his genetic profile saved in outer space, and one of our orangutans starred in a movie with Clint Eastwood,â she said.

The apes were highly intelligent?

âYes, Kanzi made music with someone famous. I think it was Paul McCartney. One ape would mimic whatever I did â sweep, cook, etc. Tico was the only baby born. The USDA didnât want them being raised in captivity, but Tico snuck in when his motherâs birth control didnât work. Some had amazing computer skills.â

What did Addy do next?

âI worked for city greenhouse and kidâs bike trails, growing and planting things. Then I ran for Congress against Bruce Braley and David Young and for the Iowa House. I have been a proponent of âranked choice balloting.â The system now is just too bipartisan. In states with ranked choice, you see more candidates than in states without it. Itâs also really hard for an independent to get enough petition signatures to be on the ballot.â

How did she come to be working at the auto salvage?

âItâs called Desoto Insurance Auto Auction. Right now, itâs in a second phase of COVID shutdown, but at full throttle there were 400-plus cars a week going through the auction block. There were about six of us driving the cars. These are all wrecked cars, so itâs hard to keep tires inflated, to start the car and to open the doors,â she said.

She also works at the Wells Fargo Arena box office.

âI just canât do nothing. I love driving wrecks, and I love selling tickets. And, one time, I had eight part-time jobs at the same time.â ♦