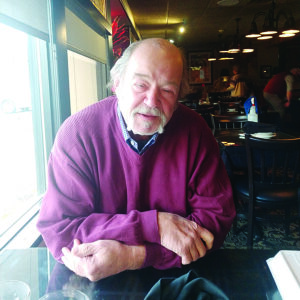 Chef Steve Little owned Johnnyâs Vets Club, Winstonâs and Chefâs Kitchen. He sold the latter a couple years ago and âretiredâ as a restaurateur but still caters, consults with younger restaurateurs, and represents an Omaha co-op that buys groceries for restaurants. We asked him to lunch recently, and he chose Cosi Cucina, an Italian grill in Clive that features wood-burning pizza ovens and family recipe pastas. The cafÃ© gained a lot of notoriety in the early 1990s when Clint Eastwood hung out there during the filming of âBridges of Madison County.â

A sign on the entrance announces that customers are not allowed to bring their own desserts inside. I asked Little if people actually try to do that.

Does Little have any advice for young restaurateurs?

âYeah, donât do it. If you do it, keep it small. With no idea when the current labor shortages will end, how can you make money with big mortgages and empty tables? There is a new place on Ingersoll at MLK that cost $5 million to open. I canât imagine how that can work. I drove by about 8 oâclock, and they had six cars in the parking lot,â he said.

I added that the marvelous new Proudfoot & Bird restaurant is so short of labor that they only book a minimum number of tables each night, rather than overwhelm servers with too heavy a load.

âThis is a new era for labor shortages. When I had Johnnyâs Vets Club, I employed 12 waitresses on weekends to serve five dining rooms and a lounge. I couldnât possibly staff that today.â

What else has changed dramatically the last three decades?

âSteak inflation is a real problem. I used to buy whole top sirloins for $2.59 a pound. On a weekend, I would cut six cases of sirloin at the Vets Club. I did not know how to butcher until I owned a restaurant. Then I butchered everything. We even sold our fresh ground burger and chili meat to customers. We sold a lot of our Italian dressing, too. It was made with eggs, and people loved it. I donât even know if it would be legal now. Today, I donât even know where you can buy whole sides of beef. Mostly it comes in precut and costs a lot more. That might be cost effective though with labor costs shooting up,â Little said.

What was his favorite restaurant?

âJohnnyâs Vets Club. I loved that place. It was special, like an old fashioned supper club or roadside cafÃ©. We had the piano room, and, during the first Gulf War, people would pack it for hours singing along to patriotic songs. We had two piano men. Jim Nelson and Frank Norman. Jim even had his own songbook with his original arrangement of all the songs he played. Frank used our standard songbook and both guys were popular.â

That sounds like the great scene in âCasablancaâ where the French patriots sing down the Nazis.

What ended the Vets Club?

âFlood waters. I remember going to Star Equipment to rent pumps to try and keep the water that breached the dike from flooding the restaurant. Pumping out the water also pumped out the sand and dirt that formed the foundation under the building.â

What other changes in the restaurant industry trouble Little?

âIt has become almost impossible to get cooks to clean. They donât teach cleaning in culinary school. Yet everything falls apart if cleanliness is not top notch. Dishwashers are paid less than all other jobs in the restaurant, and, if you are short or out of clean plates or utensils, the entire service falls apart.

âI did most of the cleaning myself because I liked it. It took me a month to clean the kitchen at Vets Club. I put all the equipment on wheels so it was easier to clean underneath. I usually hired someone to help me clean rather than talk another worker into it. I would go in early to wash dishes.â

What were some of his favorite old restaurants that he did not own?

âI loved Imperial House. Warrenâs Steak House was great. They would cut your steak when you ordered it. One place that wasnât around long but was fabulous was Gianniâs. On Sunday nights, they offered fabulous 14-ounce cuts of prime rib, and you got a second cut for free if you ate the first one. Several of us would go, and we all ate two prime ribs. We drank enough that the restaurant didnât lose any money on us,â he recalled.

âI also miss late nights on Sixth Avenue. That was a place we probably should not have been going to, but we did. You could get anything you want at the Y Not Grill. Anything. Today the closest thing is late night at the Caseyâs on Hickman at MLK, but I am too old for that now,â he said.

What does he make of the success of franchise chains?

âThey have reasonable prices, and they completely control consistency. Applebeeâs is not a favorite, but they have a two for $22 dinner that is as inexpensive as dinner can be.  I have to believe that the Texas Roadhouse in Johnston is the busiest restaurant in Iowa. The parking lot is always packed. I think that fast food biscuits are excellent. McDonaldâs biscuits and gravy is a good deal. I think Hardees makes their biscuits in house from scratch. On the other hand, I donât get Caseyâs pizza, too much dough. Besides there is something wrong with the concept of a gas station pizzeria.â

What is the story of Littleâs clam chowder?

âI learned that from Pep Perez at Players. I took it to my other places and to Wellmanâs Pub, but I donât think the same recipe is used today. I will give the recipe away before I let it die with me.â ♦