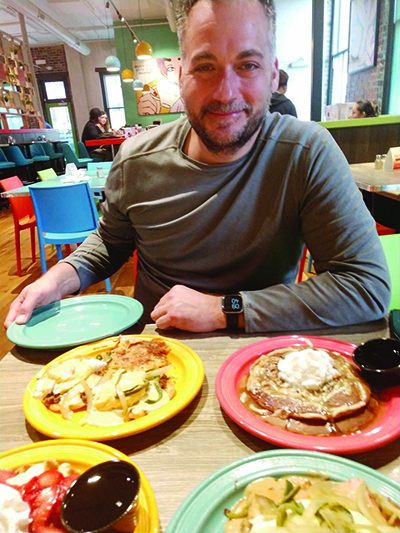 Tony Lemmo owns Aposto at CafÃ© di Scala and is a partner in Gusto, Juniper Moon, El Guapo, Breakfast Club and Anna Dolce. We asked him to lunch recently, and he chose Breakfast Club in East Village. Fifty years ago, downtown was home to a number of small diners that served breakfast and lunch but not dinner. Breakfast Club would be bringing that back, except that they are not a small diner. They are a big restaurant with a happy theme of orange and turquoise colors, throw-back furniture and large wall murals. One of those is of Des Moines as a waffle.

âWe auditioned a dozen bacons and I think nine kinds of ham to find our breakfast meats. We have been working a long time to perfect the hash browns and the waffles. I think we finally got them right,â he revealed.

Drinking Pammel Park coffee from Winterset, we talked about the restaurant business in the time of the COVID.

Is the business bouncing back yet?

âAposto is fully recovered. In fact, Wednesdays and Thursdays are now as busy as Friday and Saturday used to be, and we are completely sold out for two sittings on Fridays and Saturdays. I took a table out during COVID and never replaced it. I think customers liked the extra room.

âOn the other hand, the pizza business is not coming back like fine dining, and I have no idea why. Maybe people ate too much pizza when they were quarantining. However, there are signs that might be changing, particularly for lunch, which just got killed during the shutdown. Lately I have noticed that there is a lot more traffic going downtown when I pick up my girls at day care,â he explained.

How did the shutdowns change Lemmoâs personal life?

âI got used to two things â spending more time with family (his girls are 4 and 2) and making over the restaurant. I spend an average of six and a half nights a week at home now. Having so many different partners helps to make that possible. So does being open only four nights a week at Aposto. I looked in the mirror and noticed that I was not a seriously creative guy. I work with people who are, and now I ask, âHow can I help?â

âDuring COVID, I put a new roof on Aposto, a new floor, two new furnaces, new appliances, remodeled the kitchen. I canât hold still. I have to be doing things, plus I believe you can never let fear grip you. Even when I was 5 years old, I dug a grave-sized hole in the yard. A few years later, I was taking a TV completely apart,â he explained.

What was the most scared he ever was?

âActually, that was 17 years ago when I opened my first place, which was a lunch stall at Metro Market. I was 23 years old, and I was committing to $787 a month rent. I was scared to death,â he recalled.

Who all started food businesses in Metro Market?

âJoel Lopez had a Mexican stall. Pickett Fences started selling their free ranged milk there. Pork County BBQ was there, and they made fabulous brisket. L.T. Organic Farm sold there. The Mast family sold baked goods they made. Tulaâs Greek food was there. Delaware County Meats had a stall. It was a great experience and a great group of vendors,â he said.

What is going on now at El Guapo? Was it a good move converting a Gusto to the Mexican theme?

âDefinitely. Pizza just wasnât moving in Waukee like it was in other places. Fortunately, Waukee loves El Guapo. The cocktails are popular, and so is the food menu. Chase, the GM there, really has the margarita down, and they only cost $4 at happy hour. We added a sixth day of being open and included a weekend pozole and expanded our tamale nights. One of our employees at Gusto, Arturo Reyes, has his own tamale business, so we use his product,â Lemmo explained.

Lemmo and his wife found their dream house and moved out of an apartment above Aposto. How is that working out?

âFabulous. I love Owlsâ Head. It is so quiet and so close to Water Works that itâs perfect for taking the girls for a walk. Plus, I love the sound of the trains. They shake the house, and that comforts me,â he said.

Having recently recovered from COVID, how did Lemmo handle that?

âI checked myself into a hotel to protect the rest of my family. Of course, I couldnât just stay in the room. I started going to drive-through places I would not normally go. I found that I really like the B-Bops on George Mills. Its drive-by window is the busiest I have seen. I also liked Pot Belly sandwiches,â he said.

Are Lemmoâs girls compatible as sisters?

âThey are as different as any similar DNA can be. One is fussy and controlling, even to the point of bullying sometimes. The other is afraid of her own shadow. One wants to eat tater tots every meal, but we canât let her because I want my girls to expand their palettes. I was too much like her, and I never tried seafood until I was 23 years old,â he confessed.

Is Juniper Moon recovering from COVID?

âSort of, but Ingersoll construction still hurts the entire avenue. My partner and manager there, Jason Garnett, is one of those creative geniuses I yield to. I think he is the George Formaro of cocktail making. But we are rethinking things. Older people like the place so much that happy hour is packed, but few people are there after 11 p.m. Thatâs not sustainable,â he concluded. ♦