Des Moines Performing Arts president and CEO shares thoughts about his personal background, travel, and COVID impacts to the industry. 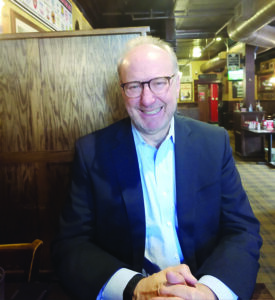 Jeff Chelesvig is the president and CEO of Des Moines Performing Arts and last year celebrated his 25th anniversary at the Civic Center. He is Iowaâs only Tony Awardsâ voter, president of the Independent Presenterâs Network, served on the Broadway League Board of Governors, and received the Broadway Leagueâs Samuel J. LâHommedieu Award in New York for Outstanding Achievement in Presenter Management in 2005. With the performing arts emerging from 19 months in COVID-19 withdrawal, we asked him to lunch recently.

âRoyal Mile is a favorite with the traveling crews that come to the Civic Center. I like the dÃ©cor,â Chelesvig says.

âLondon is my favorite city in Europe to travel. Pre-COVID, I would go every year and often twice a year. I love the theater there and also the museums which are mostly free. I like to branch out from the West End and see what is going on in the neighborhoods.â

I ask if heâs been to the Savoy Theater, the house that became a world famous hotel built by Louis and Sullivan.

âOh yes, the theater is iconic.â

I say that I do the same thing with soccer stadiums. He asks my favorite team and looks surprised when I say Arsenal. They are a blue-collar team from north London. Most arts people in London prefer Chelsea, the reigning European champion from the West End, or Fulham another lesser West End team that plays in a stadium that is attached to the home of Anne Boleyn, the first of Henry VIIIâs wives that he had beheaded. He asks if I have seen Ted Lasso.

âItâs a wonderful comedy about a woman getting her husbandâs beloved soccer team in a divorce. She wants to ruin the club, so she hires an American coach who thinks it is American football. It was made as a quick promo and was so funny itâs now a full-fledged series,â he explained.

So how is the Civic Center emerging from 19 months of canceled performances?

âWe had our first ticketed show two weeks ago â the Des Moines Symphonyâs return. This week we had Frankie Valli and the Four Seasons, rescheduled from earlier. That is the original Frankie Valli not a Jersey Boys cast. Next we have âThe Bandâs Visit.â That was originally an Israeli film that won a Tony as best musical.â It is also one of only four musicals ever to win the big six awards â musical, score, actor, book, actress and director. It tells a story about an Egyptian band getting lost in the Israeli desert. Itâs a really big score for the Civic Center.

The Symphony had a full season of Beethovenâs greatest hits scheduled last year for the composerâs 200th birthday. Were they able to keep that plan on his 201st birthday? After all, the 2020 Olympics were in 2021.

âYes, they opened with his 5th symphony and have plans to perform the Ninth, plus a triple violin concerto, and the 3rd piano concerto. They did reschedule Carmen Burana, but I think the Beethoven program is going ahead.â

What did Chelesvig do before he came to Des Moines 26 years ago?

âI grew up on a farm outside Eagle Grove and moved to Belmond where I graduated high school. I went to Gustavus Adolphus for two years and transferred to Iowa State to major in theater business. I worked there as a stage hand. I also sang in the choral group and would get invited to work backstage at the Civic Center when they needed extra help.

âAfter college I worked in Tampa and sang in the choral group there that worked with the symphony. We would perform three to four major choral works a year. We did Beethovenâs Ninth, Verdiâs Requiem and The Messiah.â

âObviously New York. I would go there almost every month before COVID. That is where I do the most business. I have been to all 42 Broadway theaters. Most friends are amazed by that. I like to take planned trips with outfitters. I have biked or hiked the Swiss Alps, Oregon, Washington state, and Arizona with such groups. I like France and Italy a lot.â

Does the Civic Center put up the traveling crews?

âNot for Broadway series shows or for major concerts, but smaller productions we often do. We have a long-term relationship with the Savery Hotel, as it is so close to us. I am really excited to see the remodeled Hotel Fort Des Moines. Lately we have been using more East Village hotels.â

Do the visitors have other favorite restaurants besides Royal Mile?

When a big show is playing Des Moines, does Chelesvig work all week long?

âNo, my staff wonât let me get involved with the production work. They worry I will mess it up. I am more about being present. I like to interact with the performers and stage hands. Most of my work is all pre-show, with contracts and such,â he explained.

What else in the metro does he like to visit?

âI like to see what the high schools are doing. Every year we have a music camp for high school performers, and we bring in New York pros to work with the kids. We show them a before and after tape of their performances, and they are amazed how much they learn in a week. I am going tonight to see the 80th anniversary showing of âCitizen Kaneâ at Jordan Creek. Most of the TV I watch is Turner Classic Movies. I love old movies.â

Des Moines has come a long way in 26 years arts wise. What is still needed?

What is exciting down the road?

âI am taking my first trip to New York since COVID, and I will see the premiere of âSix,â thatâs a new show about the wives of Henry VIII. For the Civic Center, we have a return of âMy Fair Lady,â with the Lincoln Center production, Bernadette Peters, âHamilton,â âRent,â and â1776.â â n