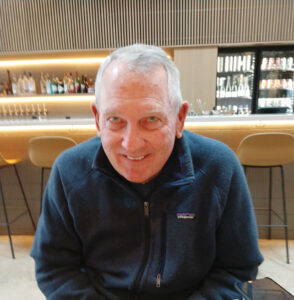 I met Jim Cownie about 65 years ago on a sandlot baseball field. He was the kid all other kids wanted to be â the best at every sport. I was the youngest kid playing at the time, and Cownie would pick me on his team sooner than my talents deserved. Today Cownie is the businessman that all others want to be, a philanthropist and a genuine nice guy. I asked him to lunch recently, and he picked St. Kilda Collective in Valley Junction.

The restaurant occupies a gorgeously restored building that was originally a Ford dealership. It would rival any building in East Village for faithfully supplementing the original historic character. The large rooms are dominated by a wood burning grill for steaks, chicken and fish. The separate bakery kitchen is glassed in up front and turns out pastries for both the St. Kilda cafÃ©s in the metro.

âI have heard good things, and my son is part of the group that owns the building. I also know Alex Hall (owner) from his other place in East Village. My office is a couple blocks away there,â he explained.

Cyd Koehn of Cydâs Catering thinks the coffee here is the best in town. The espresso machine is the most stylish.

âI have a memorial grassy knoll on my farm near De Soto. I lay down boulders there for lost friends. There are boulders for Randy Duncan, Jim Corcoran, Chris Green and Jon Gaskell. I have more ready. Hoping that wonât be too soon.â

I ask about the special friendship he had with Gaskell, who died in 1991.

âHe was instrumental in getting Hawkeye Cablevision publicly traded. One day Gaskell and I were on Lake Vermillion, and we decided Comet Island was the best place to drink martinis. So, Gaskell, who had done well as a broker, convinced me that we could buy it. It was $155,000, and I really couldnât afford it, but we bought it anyway. Jon had four kids, and I had five. Four of each were the same age, so sharing the summer place was an ideal way for them to grow up,â he recalled.

Gaskellâs death followed that of his wife, Ruth. Cownie then adopted the four Gaskell children.

âThatâs why I still have such a big house. All the kids have always had their own rooms. Of all the good fortune in my life, the greatest is my large family. Itâs a true blessing,â he said.

What are the most important lessons he has learned?

âEvery now and then, there are going to be some bad ideas. You have to stand up and ask the hard questions.â

Cownie is well known for his successful ideas. What were some of his failures?

âI lost a lot on West Glen but not anything like Bill Van Orsdel did. I have great admiration for him. He took it like a man. I bought into a plan to buy brand names that Proctor and Gamble were retiring. I now have Biz and Oxydol on my personal wall of shame.

âI thought that an environmentally friendly tire burning facility was a good idea. It wasnât. That was tied into a turbine turning coal plant in Wisconsin. Dunkin Donuts didnât work out either. There have been some bad ideas but lots more good ones. They have made it possible for Patty and me to give a lot of money to some very good causes. At 76 now, I want to do more,â he said.

What are his favorite giftees?

âI like good things that people are investing their own money in. My favorite is Dowling Catholic High School. I think the four happiest years of my life were spent at Dowling. I was busy all the time, and I made friends from all walks of life there. The worst four were spent in college at Notre Dame. I wasnât busy and was never as unproductive again. I like the Catholic Diocese of Des Moines. Joe Charron and Mike Hess are great people. The YMCA was a great cause of mine. Greg Abel (Berkshire Hathaway Energy CEO and the favorite to replace Warren Buffet) is a very impressive voice. I have supported the Mid American Recplex in West Des Moines because of him. Drive out there and see it, itâs really impressive. All those places were seven-figure gifts. I also like Mercy Hospital and the Des Moines soccer complex named for my dad,â he said.

I remind Cownie that our late friend Dick Jacobson became so tired of people here pitching him for money that he avoided Des Moines in his final year or two.

âYeah, he hid out in San Diego. I call it the philanthropy flu, and Jake had it worse than me. Donât get me wrong, though, itâs much better to be getting those calls than making them,â he explained.

What about Des Moines has surprised Cownie the most over the years?

âCasino gambling at Prairie Meadows. Bill Reichardt was a big supporter, and I never thought it had a chance. Then Jim Rasmussen got involved and talked the horsemen into it. I think Janet Metcalf cast the deciding vote for it. The second thing is the best thing â the rebirth of downtown housing. I recall having maybe 60 units and being unable to rent half of them. Now there are 10,000. We have long had a downtown workforce of 60 to 70 thousand. How great is it now that so many can live downtown and walk to work?â he said.

What is most important for the metro going forward?

âWe have to build a downtown tax base. The suburbs donât have the problems Des Moines has with non-tax-paying entities. We canât build a tax base building $175,000 houses here. We need big developments, like what is coming online by the river between MLK and Market. That is a billion-dollar development.

âDes Moines is landlocked by suburbs. Our only unique attraction is downtown. Downtownâs success is a winner for the whole city,â he concluded. ♦