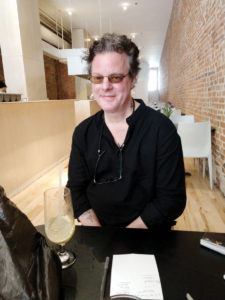 Steven Vail is an international art dealer whose Steven Vail Fine Arts gallery is in Des Moines. I asked him to lunch, and he chose Lucca, Steve Logsdonâs mostly Italian cafÃ© in East Village. On our visit, the carryout business was considerably more active than the indoor dining.

Over a lunch menu of salads, sandwiches and pasta choices, we talked about Vailâs recent move from East Village to the Gateway area two years ago.

âThis is the first time I have been to Lucca in a long while. I used to come here all the time. Itâs just a charming concept,â Vail said of the 19th-century building that had been reduced to an open alley with two brick walls when the late architect Kirk Blunck determined to rebuild a two-story restaurant between the two walls. âHe also owned the Crane Building for a long time. It was basically a large pigeon cage, but he had a cell tower on top and that paid his taxes till he figured out what he wanted to do there,â he recalled.

Vail was a close friend of Blunck, who died in mysterious circumstance four years ago. In fact, the architectâs body was found in front of Vailâs gallery door after being thrown over a staircase two stories above. Talking about his friend made Vail emotional.

âHe decided to save all these marvelous old buildings that most people wanted torn down. And he did it. Whenever he was pitching one of his offices or retail spaces, he would reel off the names of previous tenants. He ran a start-up incubator and had such an eye for young talent that most all of them outgrew him and had to move to larger buildings,â he recalled.

Vail moved himself two years ago to the Fitch Building after Blunckâs death.

âYeah, it was a good move for me. This gallery was completely designed to be a gallery. It took three years to plan and move. The Pentagon only took 18 months from blueprint design to open-for-business. I used three different architects, all of whom once worked for Blunck. I have a street-level entrance with an overhead door. (He was on a second floor in the Teachout Building in East Village.)

âThatâs so important to me because I can take deliveries inside the gallery now. In the old place, delivery services would just leave stuff on the sidewalk for me to deal with. Once, for our exhibition of Chuck Close self-portraits, they left three quarters of a million dollars in prints out on the sidewalk, a half block from the Locust Tap,â he recalled.

Did that work out OK?

âYes, but I had to call several friends to help with the rescue.â

âYes, but not as often at all. I feel bad because at one time Kirk brought me a restaurant license for the Locust Tap and asked me to frame it and hang in the bar. Somehow that certificate is lost now. And if they still had it, I think they could have remained open during the bar shutdowns. I have no clue how he managed a restaurant certification for the bar,â he said.

How did Vail become friends with many famous artists?

âWhen I first moved to New York City after college, in my 20s, I rented a spot on Bond Street. Jan Franck had 90 percent of the floor space, and I had a little corner. But I started hanging out with Jan and his friends. Chuck was one of them. We would sit on the floor drinking Jack Daniels and playing cards. He was surprisingly soft spoken, not what one would expect from his art. He also has face blindness, so I doubt he would even recognize me anymore,â he recalled.

Yet Vail hosted the biggest exhibition of Closeâs limited edition self-portraits that was not on the East or West Coast. What other friends did he make in New York?

âThere was a bar across the street from my place on Bond Street called il Buca. We hung out there with David Byrne, who was a regular. One night I was there with (the late painter and Des Moines native) Luther Utterback. He wanted to show me their Christos, which were all over the place. Then in walks Christo. We sat down and drank vodka.

âLuther made a point of introducing me to artists. He took me to meet Joseph Kossuth, Claes Oldenburg, Richard Tuttle and Louise Bourgeois. Did you know she considered her famous spiders to represent her mother? I met Keith Richard, too. Every one of those guys could not believe that I was from Iowa. I donât think they had met anyone from Iowa,â he said.

How does the gallery work in Iowa?

âItâs possible now to run an art business anywhere, thanks to air freight. The huge majority of my customers are investors from the coasts and even from Europe,â he said.

Whatâs coming up for the gallery?

âWe have a binder filled with two years of exhibition ideas. Thatâs my favorite part of the business, planning a show. I want to do a political show with stuff like Warholâs Reagan; a femme fatale show of Mel Ramosâ pinup girls; a Farm to Table show of Oldenburg cows and Thiebaud cakes. More than anything, though, I want to have an exhibition of mid 20th century abstract expressionists.â

Who is the strangest artist Vail has met?

âVito Acconci. He was so private he would walk around the ped mall in Iowa City with his hands covering his face. He also had a great quote, âArchitecture is import because nature is fucking dangerous.â â

Who are Vailâs favorite local artists?

âI donât really think of them as being local. Just because they live here? Edgar Camacho is the real deal. Jeremiah Elbel is a family man now, but when he decides to paint again, he will paint brilliantly. Heâs a visionary, too. He painted a crowd scene of people wearing surgical masks five years ago,â Vail concluded. ♦