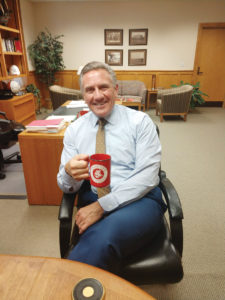 Kent Henning is a month away from closing out 20 years of leadership at Grand View University. That Lutheran school on the eastside of town has gone through several transformations since its founding in 1896. The most significant of them occurred on Henningâs watch. We asked him to lunch recently and he suggested Tursiâs Latin King.

âBobby (Tursi) is a Grand View grad and supporter. I love his kitchen,â said Henning. âI came here from Kenosha, Wisconsin, which is largely Italian American. My daughter married into an Italian family, and my son-in-law has pronounced the Latin King âauthentic.â Usually I eat on campus so I can mingle with students and staff.â

Since Henning became the Grand View president on Jan. 1 of 2000, more than two-thirds of the current building space has been constructed, acreage of the campus has more than doubled, students in residence have more than quadrupled, and enrollment has more than tripled. Mind you that this was during a time when private colleges were losing enrollment and even their existence.

When asked to explain the roots of such amazing growth and development, Henning began where few academic administrators go.

âAthletic expansion has led to growth of all kinds. In 20 years, we have gone from seven sports with less than 200 students participating to 20 sports with over 800 participating. We have won 12 national championships in that time â eight in wrestling, and one each in menâs volleyball, menâs golf, football and shooting sports,â he said.

âLook at it this way. A student whose main interest is to pursue a degree in business administration can go anywhere. Almost all colleges have business administration programs. You compete with the three state universities, the community colleges of Iowa, and all the private universities in the state. We identified a large number of students who wanted to pursue athletics after high school but who lacked NCAA (National College Athletics Association) Division I (full athletic scholarship) talent. A lot of Division III colleges in Iowa offer sports but without scholarships. By joining the National Association of Intercollegiate Athletics (NAIA), we can grant scholarships, which Division III colleges canât do. Ninety percent of our athletes are on some kind of scholarships. A scholarship of any size is an incentive to attend.

âBesides all that, athletics brings exposure to the university. Seventy percent of our media coverage is sports related. And athletics prepare students for life and employment. Prospective employers talk about soft skills, team players who can also step into leadership roles. Sports develop that kind of thing. We call this mission fulfilment,â Henning explained.

How did Grand View get its name?

âThe school started as a college and seminary associated with the Danish Evangelical Lutheran Church in America. In 1896, they were looking for a name. At that time, our hilltop location provided a fabulous view of the golden dome of the state capitol. You can still see it looking down East 13th Street from here after the trees lose their leaves. The entire area was being developed by the Grandview company. It made sense, but a lot of people were upset because Danish, Evangelical and Lutheran were all left out of the name,â he explained.

Henning has an entire shelf of books about NFS Gruntvig. Who was he?

âGruntvig was one of the influential thinkers of the 19th century. At his time, people talked about the happy Danes, who were inspired by him, and the holy Danes, who were more in tune with Soren Kierkegaard (the existentialist). We went the happy way. Gruntvig talked a lot about education for life and folk schools. In the late 19th century, eighth grade was the culmination of education for most people. Folk schools were high schools that taught in vernacular languages instead of Latin and Greek. Grand View began as a seminary and de facto high school. When public high schools became more common, Grand View became a junior college, a college and a university with post graduate degrees,â Henning explained.

The eastside of Des Moines has long embraced an independent identity in the city. Does the university embrace that identity?

âVery much so. We are working to support the loyalty of the east side by implementing things like our View Forward Project. We offer free tickets to the neighborhood, for entertainment and athletics. We have begun a food recovery program for the community. We have scholarships for East High School graduates. We encourage students to volunteer at east side schools and to intern locally. We have acquired land around our campus to improve the neighborhood,â he said.

Is being in Des Moines an advantage in recruiting students?

âYes, a strategic advantage in that it allows students access to so much in both business and cultural opportunities. There is so much expertise in the city that we can tap into â adjunct guest speakers and teachers to provide specific expertise are available. Students can attain their required internships without leaving Des Moines. Internships are required for degrees in most university programs here. We communicate with the community through these kinds of things,â Henning explained.

âCultural access is also enhanced by Des Moines. We donât have to spend money to bring outside entertainment to campus because the city provides such tremendous access. We have Grand View night at Iowa Wild games, free bowling night, visits to community art opportunities, etc.,â he said. That allows university productions to shine on campus. Grand View has an exceptional theater department, art school and music school.

Obviously, Henning is an accomplished fundraiser.

âThank you, but I only take credit for the checks I write personally back to the university. Alums and others have been generous. Last year, we started a program to upgrade our baseball facility and honor our longtime coach Lou Yacinich by naming it after him. All the money was raised by alumni who played for him. Loyalty is reciprocated,â Henning said. ♦