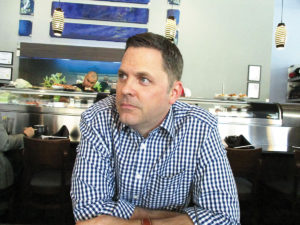 Andy Fales is WHO TVâs morning anchor and a longtime media presence in the sports scene. His features âAndy Answers,â âIowa Icons,â and âWhatâs Bugging Andy?â reveal sharp senses for irony and quirkiness. Heâs also a serious food and dog lover like myself, so I asked him to lunch recently, and he chose Akebono, the stylish sushi joint at Tenth and Mulberry.

âI met (owner) Nam Tran when he was working at Taki back in 2002. It had just opened. I had Wednesdays and Thursdays off then and I liked to go each week. I always thought it made Des Moines feel like a bigger city. It would eventually become a favorite of my wife, Kahalaâs, too. When Taki was sold and Nam opened Akebono downtown, we moved with him.
He remembers everyoneâs name and makes them want to come back.â

Fales made a move to Kansas City and returned to Des Moines a short time later. Most people think media is like baseball, that everyone wants to move up to the big league. What brought him back to Des Moines?

âThat thinking is pretty much a fallacy. Des Moines is a really great place to live and work. All of us reporters at WHO, KCCI and WOI know each other and get along. We help each other out with things like batteries. That spirit does not exist in bigger markets like Kansas City. I hung out with my English bulldog a lot there. I missed that camaraderie of Des Moines. Itâs also not true that bigger markets necessarily pay more than Des Moines. At WHO, Erin (Kiernan), Sonya (Heitshusen), Dan (Winter) and Keith (Murphy) have all had opportunities to move to larger markets and never bit. All of us came here from other places, so we recognize that Des Moines is a great place to live and work,â Fales said.

Did Fales plan a career in TV and radio?

âNo, I was an English major at Drake. I thought I wanted to be a wildlife biologist. I took journalism in high school, though, and my teacher in St. Louis had written the most used high school journalism text book. I talked my way into the profession and learned on my feet. I started at a suburban journal in St. Louis and interned at a radio station. I liked radio better, but to get experience meant moving to a smaller market. I took a job in Rhinelander/Wausau, Wisconsin, a place I really love. I take a trip there every year. I worked in sports, news and sales departments. After three years there, a job opened here in television,â he recalled.

âWhatâs Bugginâ Andy?â is arguably the funniest feature in local media. Itâs also outrageous at times. How did it come about, and how does the material make the air?

âIn 2002, I was helping out on Soundoff (WHO TVâs Sunday night sports call-in show), but I had no real role. Keith (Murphy) and I would sit around and grouse about the teams and mostly the fans. I tried to make him laugh, and he ended up thinking I was funny enough that he needed to find a place for it on the show. Over time, we are amazed at what did not get us fired. So, we continued to push the envelope. I have heard from many people in bigger markets who tell me they love the feature, but then they say, âYou could never do that here, though.â Keith is a visionary. He has a sharp sense for whatâs offensive and whatâs funny. Itâs alright to offend people if you make them laugh first. Thatâs the key.â

âAnother reason why it might work here better than elsewhere is the nature of fans in Iowa. People tend to be fans of Iowa, or Iowa State, or Drake, or UNI. All four think they are dissed by the media coverage. Fans in Iowa canât see the world around them except to gripe about it. That fanatic passion is what keeps us in business,â Fales responded.

What were Falesâ favorite assignments?

âThe Kentucky Derby and the Rose Bowl. Thereâs a reason they are legendary events. Every aspect of the day is magical. I got there before sunrise and stayed past sunset and loved every minute. I won an Emmy for covering an Iowa ownership group at the Derby, so that helps the memory. All bowl games are fun as are Olympic Trials. All are hard work. I carry my own equipment. Computers have certainly made that a much lighter load,â he said.

Who were his favorite interviews?

âBob Feller. He was a curmudgeon and had a lot of problems with the media, but I got along well with him. I treated him with respect, like a grandfather. I always called him Mr. Feller and always let him lead a conversation. He was a W W II vet and lived by a code thatâs gone with the wind. He thought the world had gone awry, but he was always fascinating. I met his friend Buck OâNeil through him, another man from a different era but the opposite of Feller. Buck loved the world and its people. Feller, not so much. I also got to work with my dadâs hero, Len Dawson, in Kansas City. He was the nicest guy imaginable, on and off camera. Thatâs rare. He told me he was sorry I was leaving when I went back to Des Moines. That meant a lot. Johnny Orr was the best storyteller. Keith was out of town when he died, so I did his eulogy report. Everyone I called talked to me. (ESPNâs) Dick Vitale talked about Orr for half an hour,â Fales recalled.

Does he like the morning beat or the late beat better?

How deeply is Andy into the food scene?

âI am an avid gardener. I grow seven varieties of heirloom tomatoes. I cook all the time. Itâs my hobby and therapy. We love the restaurant scene. Itâs grown and made Des Moines a bigger place, particularly the ethnic places â Thai Flavors, India Star, etc. So many people from bigger cities are impressed by our restaurant scene. Itâs a source of pride,â Fales declared. ♦