At Johnston Green Days 50th Anniversary Celebration on June 15, the Bill Riley Talent Search Sprout winners were announced by the âQueen of Greenâ Debra Heldt of Charter Bank, on left, and the 1982 BRTS Champion High-Tenor Doug Cline, on right, both of Johnston.

Third place winner Isabelle Ryan, 9, of Johnston to the right of Deb, sang âCastle On A Cloudâ from Les Mis and won $30 from BRTS sponsor Charter Bank.

Second place winner Jalyssa Barnard, 10, of Des Moines in the middle, will advance to the Iowa State Fair and perform her vocal solo âMy Immortalâ in August, and won $40 from Charter Bank.

First Place winner Shelby Warrick, 12, of Johnston & standing next to Doug, was already qualified to perform her solo at the IA State Fair, danced to âProud Maryâ and won $50 from Charter Bank.

Both Doug and Debra said this yearâs group of 12 Sprouts was the most talented group of Sprouts they have seen in the past 16 years of Bill Riley Talent Search at Johnston Green Days, where the audience loves to admire and cheer on our youth! And, we thank Iowa sponsor Hy-Vee for their statewide support of BRTS, too. 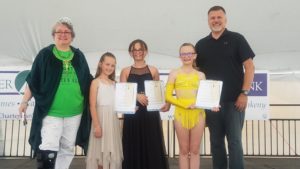