See the world from a different angle. 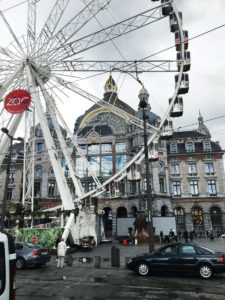 âThe Ferris wheel is going up right there,â Steve Smith says as he marks a line of white dashes that cover the entire concrete lot. And when you step back for a broader view of these fresh hopscotch marks, they actually designate the locations for each ride at the Iowa State Fair. The midway being born.

The smell of mustardy hot dogs and buttery popcorn and sweet expectations is already in the air as vendors get ready for the onslaught of fairgoers.

And my cousin, Steve Smith, is hard at work.

âWhen we set up our own carnival over the past 31 years, it is generally just an empty street to start with.â Vicki Smith says. âSteve then starts walking. Heâll drop his hat. Heâll drop a piece of wood. He steps things off. He says, âThis ride goes here, this ride goes there.â He knows in his head where everything belongs. All of a sudden the trucks start moving in, and the carnival gets set up. At the end, the trucks return, the rides are loaded. Within two hours, we are heading down the road. The old saying is, all thatâs left is popcorn sacks and tire tracks. But, of course, these days we clean up the popcorn sacks.â

Vicki smiles at her husband.

I look past Steve and see the beehive of workers beginning to set up the Ferris wheel.

As you all know, a Ferris wheel is no Screaminâ Swing, or Tilt-A-Whirl, or Zipper. Itâs a slow, romantic ride from another time. It was created for the Worldâs Columbian Expedition in Chicago in the 1890s by George Washington Gale Ferris, Jr. The original Ferris wheel had 36 cars. Each car held 60 people. By the time the Chicago fair was over, 1,453,611 people had ridden Georgeâs Ferris wheel. A grand success by any measure.

Sadly, not so grand for George. The original Ferris wheel was sold off and later destroyed. A tremendous shame. And the brilliant George Ferris died just a few years after the fair â bankrupt, separated from his wife, and sick with typhoid fever. Dead by 37. And, as at least one writer believes, all these misfortunes occurred because of his Ferris wheel.

âAnd you know, Joe, the Ferris wheel was not so good to my own dad,â Steve says.

Clem Smith, Steveâs dad and my uncle, made the papers on a humid day in August 1950:

âSmith loses arm in accident â¦ Clem Smith, co-owner of the Boone Valley Shows, lost his left arm at the elbow recently when it became entangled in derrick equipment used in erecting a Ferris Wheel. Attractions were being set up at the Pocahontas 4-H Fair.â The Billboard, Aug. 26, 1950. 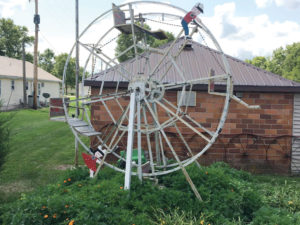 It was a bad deal for a carnival man, and a farmer, to be without one arm. But Clem Smith successfully ran carnivals, drove a tractor, and helped raise three kids. All without that arm. On top of that, he was one of the founders of the Midwest Showmenâs Association. Its motto? âOur wealth lies in our charities.â And, lo and behold, 14 scholarships go out each year to young folks in the name of Clem Smith. Not bad.

And George Ferris? His invention spawned Ferris wheel pop-ups around the world, like this massive wheel outside the train station in Antwerp, Belgium.

And this tiny Ferris wheel off Highway 6 in Nebraska.

And, sure, the Ferris wheel doesnât shoot you through the air causing your eyes to pop out, or spin you with such force that your spine relocates, but it does let you see the world from a different angle. Which accounts for why people want to ride the Ferris wheel with their sweetie. They begin the ride drinking beer and flattening the cans against their head; they end the ride married, with two kids, and theyâre into recycling.

Changing angles can do that. 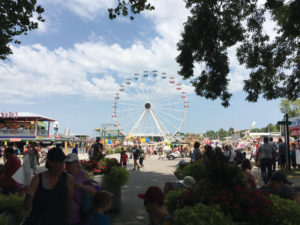 Steve and I stop our walk at the Iowa State Fair and smile at the Ferris wheel in the distance.
Clem Smith was buried many years ago. At his funeral was a large flower assortment made into a Ferris wheel. It was awesome to see it up there on the church altar. But if you looked closely, you noticed something was wrong among all the intricately arranged blossoms stretched out on the frame. One spoke was missing. A Ferris wheel in mourning.

Today, there are two people slowly revolving high above the State Fair, bedazzled, and trying to decide what happens next. Their chair lurches to a stop at the very tip top, causing everything to swing slowly back and forth. They turn and look at each other, nervous, unsure of the future, and â¦

â¦ and years later they can tell their grandchildren, it was all because of the Ferris wheel. ♦

Joe Weeg spent 31 years bumping around this town as a prosecutor for the Polk County Attorneyâs Office. Now retired, he writes about the frequently overlooked people, places and events in Des Moines on his blog:www. joesneighborhood.com.