Tromping around with a dog 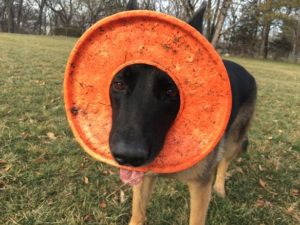 Dogs just arenât my thing. Sorry all you dog lovers. Itâs just the way it is.

Sure, Iâve had more than my share of the mangy critters. Why? Because my wife and kids keep bringing them home â over my loud objections. And itâs always the same. I feed the newest member of the family $3,000 worth of dog food, they shed buckets of hair on the furniture and rugs, and then they poop in my neighborâs front yard while my neighbor gestures at me from the window.

âHi, neighbor,â I say in my best Mr. Rogersâ voice. At the same time, I give a small shrug that when translated means â who am I to dictate the bathroom habits of an animal larger than most kids in middle school? I am a victim.

My neighbor does not seem sympathetic to this argument.

Listen, donât get me wrong, I feel the same way about all the cats who stay with us and treat us with mild disdain. I felt the same for the 25-cent goldfish that lived for a thousand years in our kitchen and was generally a poor conversationalist. And even the turtles of my youth had little joie de vivre.

Lord, I think my left arm is actually dislocated. The obvious result of the machinations of this German shepherd that is constantly stretching my left arm just a bit too far. And not because it is trying to save me from an onrushing truck â nope â but because a month ago some shameless poodle peed on that blade of grass just out of our reach.

But my complaints are ignored by this 100-pound monster who nonchalantly continues snuffling with large gulps of its flared nostrils.

âIâm talking to you,â I say in a huff.

But itâs just like talking to my adult kids, who have taken to calling me âold man,â accompanied by a lot of eye-rolling, and ending with advice to not get up on a ladder.

So here I am. Everyone is busy. I canât get up on a ladder. So I tend to tromp around with the dog.

I used to tromp around with my kids and our gigantic yellow lab, Micky, back when the kids were small. We would head down to the Des Moines river and walk on the dirt paths running close to the water. No one was around, and the trees and water and bright sunshine were the ticket.

One of those winter days I walked up river with my kids, enjoying the cold and the woods. Childrenâs cries of joy were all that could be heard as they raced up and down the path.

Meanwhile, before I knew it, Micky ran out on the ice covering most of the river. You can guess what happened. He broke through. It was a shockingly simple turn of events. No fanfare. No crescendoing music. No thunder to introduce a plot change. He just slipped into the fast-moving water. End of story.

He fought it for a while. He tried to climb out. But his 130-pound body refused to find a purchase on the remaining ice. He was wet, and he was tired, and he was stuck.

And then he started crying as he hung onto the edge of the ice. Long, mournful wails. A sound that echoed down your spine, triggering a distant memory of tooth and claw and sudden death. A wail of terror.

And I stood helpless.

I am unclear about many things, but I knew not to climb out on the ice. So we called 911 but were told they could not do dangerous dog rescues. Passersby, attracted by the cries, yelled advice. I tried to get Micky to let go of the ice flow and swim downstream. I did things to entice him to the shore. I encouraged him to stay afloat. I pleaded for him to hold on.

And my children? They looked at me. Deadly quiet.

This was not going to end well.

So I did a really stupid thing â one of many stupid things Iâve done in my life. I crawled out on the ice holding onto a long branch that was held at the other end by a passerby, who was himself held by a second passerby. I grabbed the matted scruff of Mickeyâs submerged neck and in an adrenaline-fueled moment flung his water-logged, flea-bitten carcass up on the ice.

Of course I wanted to brain him and throw him back in the river. Instead I held him close to warm him up, cursing the whole while that I was done with dogs, no more dogs, I hate dogs. Period.

Today, I throw the frisbee for the millionth time to Charlie, a dog my now-absent daughter (really?) brought home. He catches it in midair and returns proudly with his prize.

Itâs hard to take him seriously when he looks like this. But whatâs to be done? Everyone is busy. I canât climb ladders. So I tromp around with a dog. ♦