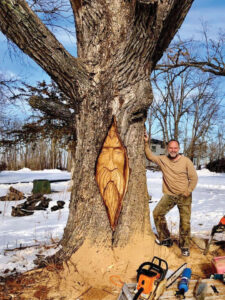 After the derecho decimated hundreds of thousands of trees on Aug. 10, 2020, a chainsaw carver known as Dusty Buzzard received more than a hundred calls following the disaster.

âIt was a wild week,â he remembers. âAll of a sudden, I have too much to do.â

Dusty began chainsaw carving almost by accident more than 25 years ago. While working for a tree removal service, he cut down hundreds of trees. One day someone asked if he could carve the stumps into mushroom figures. As he tried it, all the neighbors were watching.

âPeople took pictures, and there was a lot of buzz,â he says. âI thought I might have a new profession. People responded positively and loved it.â

Early in his career, he researched which tools worked best besides a chainsaw. He owns more than a dozen chainsaws in varying sizes and uses up to five saws for each carving.

The most popular carved item is an eagle.

âAfter youâve carved a bird 50 times, you know how to do it by now,â he says.

Heâs carved a variety of wildlife and animals, as well as a 12-foot Civil War soldier holding a musket.

âIt was a real fun one,â he says. âPeople came dressed in Civil War garb, and it was a cool reenactment.â

His most unusual request was from a man who wanted a dead raccoon in a coffin.

Iowa trees are hearty, and he prefers oak or ash for carving wood. To ensure the wood is solid, he first drills a hole into the center. If itâs hollow or if he runs into decayed wood, he wonât carve it.

One man flew him to California to carve a stump in front of his cabin. Since the carving process can take anywhere from a half day to a whole week, out-of-town folks offer him a place to stay in their homes while he completes the project.

Dusty says he has never had an accident with his chainsaw. However, last year while buzzing away, he came close as the scaffolding platform he was standing on dropped.

âI only tore a ligament, and fortunately the saw didnât get me,â he says.

The physical demands are the most challenging part of his craft.

âTry holding a heavy saw and bending, squatting and reaching with it,â he says. âYou donât just stand there with a saw.â

His favorite carving sits in West Des Moinesâ Stilwell Junior High School. It is a carving of a tiger paw in honor of the schoolâs mascot, Valley Tigers.

âMy son was in seventh grade going to that school at the time,â he explains. âKids told him, âWow, your dad is awesome.â â

âIâm in the middle of a project and get lost focusing on the wood. Three hours have gone by, and it feels like 15 minutes. I get paid to do this. Itâs crazy,â he reflects.