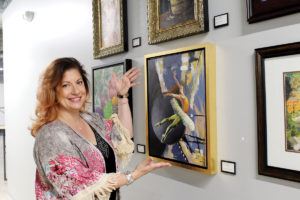 Amy OâBrien has tried numerous careers, but art was seemingly always in the back of her mind.

With five different college majors in 11 years, Amy OâBrien struggled deciding what to do with her life. She waited tables. She tried marketing. She attempted interior design. She once owned a restaurant. She even tried her hand as a cosmetologist. These were things she did to pay the bills, but through all of it, in the back of her mind, she knew she had a passion for drawing.

While waitressing in California, a life detour appeared. OâBrien needed major knee
surgery, and while stuck in bed recovering, her passion reemerged. She began sketching, drawing and painting portraits.

Artwork didnât pay the bills, so a few careers later, she moved back to Houston to be closer to her hometown of New Orleans. There, she met her husband and sold her first commissioned painting.

After landing in Des Moines, OâBrien began painting out of her basement studio.
Then she heard about Mainframe Studios and had the opportunity to voice her opinion and give input regarding it and the Des Moines art scene.

âI helped brainstorm with the Mainframe Studios â and it jazzed me to get my own space,â she says. âI was excited for what it meant for the Des Moines art scene.â

OâBrien opened a studio at Mainframe in 2017. She originally planned to possibly share her extra large floor plan with another artist. Instead, she came up with a plan to offer âsip and paintâ classes.

After researching what similar types of classes offered, OâBrien decided to do some different options. She offers an assortment of canvas sizes, cooks a meal, and she can provide snacks or adult beverages. For her Cinco Des Moines class, she made Mexican food. For her St. Patrickâs Day theme class, she provided
homemade Guinness stew.

Painting instruction, though, is first and foremost on her mind. It also occupies the top spot on her whiteboard in her studio.

âI teach step by step the elements of art and design,â she says. âIf you follow the simple rules of painting, then anyone can do it.â

She admits to using paint that is âtoo expensive,â and a three-hour class once turned into five hours, but participants want to keep improving.

âIâve had painters cry because they couldnât get it right,â she says. âI had one person black out the whole canvas and throw it away.â

Paint and wine aside, OâBrien also manages to paint and sell some of her own creations, including some to Zanzibarâs Coffee Adventure.

She says she works best under pressure.

âArtists need deadlines,â she says. âIf Iâve promised someone a piece, then it forces me to get things done. Art is a practice. Itâs a skill that improves when you use it, just like any other skill.â

OâBrien feels fortunate to work as a full time artist, and her studio promotes creativity.

âI start a painting and now have time to let it ruminate, walk away, then come back to get a fresh look,â she adds. âIt brings me joy. It makes me feel accomplished and worthy. I love to share with the world and to share my
knowledge with others.â ♦