Innovation in the year of the virus 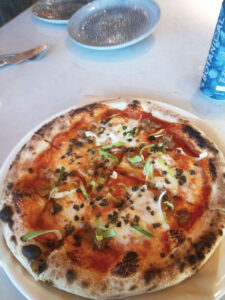 âThey say that time changes everything, but actually you have to change things yourself.â
â Andy Warhol

Business schools are already teaching classes about coping with viral challenges. This year will probably be studied for a long time. Two new restaurants that opened during the epidemic throes stand out for their innovation.

Franka is a pizzeria in East Village. It began the epidemic as a surf and turf fine dining cafÃ©. The latter business plan was not working at a time when diners were not skipping fine dining experiences. The pizzeria concept made lots more sense for the time. Pizza travels well, and East Village is full of carryout customers. Itâs working so well that there will be no return to the former template even when there is no viral threat.

This pizza is really good. It is a minimalist pie. If you expect the typical pizza of Dominoâs, Caseyâs and Pizza Hut fame, this might not be for you. Each bite is not exactly like every other bite, laden with cheese oozing over the crust and uniformly packed with marinara and your choice of toppings. The recipes of Franka pies are conceived to exercise a diversity of flavors and textures.

First of all, the dough is awesome. Thin crusted and fired at 700 degrees, it delights people who donât usually love the crusts. The closest local thing to these pies is probably found at Eatery A. I tried an arraabiatta pie with spicy homemade fennel sausage, tomatoes, crispy capers, leeks and fior di latte, which means milk flowers. This soft cow cheese is usually added late in the cooking cycle as it melts fast. I also enjoyed a white clam pie with cream sauce, shallots, garlic, parsley and lemon. A soppressata pie treated that king of salamis to olive oil, tomato, fior di latter, garlic and fresh oregano.

From the appetizer menu, calamari stood out with both rings and whole baby squid, a sauce of guardiniera, pickled fennel, and lemon. Meatballs were made with three meats. Cambozola (a soft blue cheese from Germany) was served with garlic and tomato jam. Beet salad was dominated by greens and apple with a crack orange vinaigrette and more Cambozola.

There is a Sunday brunch.

The strip of Merle Hay Road between Meredith and Ovid features an overwhelming diversity of fast food chains including five fried chicken, five sub, two taco choices, and a whole lot more. Itâs an unlikely place for a new indy Asian hybrid. But the Flying Mon Noodle Shop is a
trailblazer. Noodles are the feature here and include wheat, rice, cellophane, thick, skinny, fried, boiled, cold, won ton and dumpling styles.
Homemade broths are made with both beef and chickens.

Also featured is a Chinese style barbecue for ducks and whole pigs. I tried a plate of âPekingâ duck, which was noticeable for what it lacked. A plate of chopped duck pieces, bones and all, was served with no mini pancake wrapper, no plum sauce and no scallions. Those things are essential to Peking duck, which is usually sliced off the bone, often tableside, and served with crispy skin on, scallions and plum sauce. This was more like Cantonese duck. Even rice was an added cost. Pork was sensational both as a rice plate and as belly appetizer. I loved it in a bowl of dumpling soup, too. Ramen was served with chicken and a perfectly poached egg. Suki yaki soup mixed seafood with pork. Green papaya salad and edamame stuffed dumplings were big hits.

Service could improve. No condiment trays â not even soy or fish sauce â were on tables, and some need hot chili oil to spice up dishes. ♦