New frontiers for tamales and pho 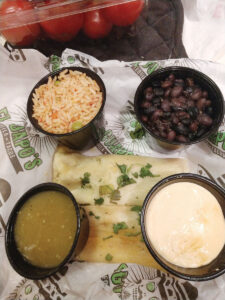 Tamales from Reyes at El Guapo

Tamales are cornâs most divine application. They are to tortillas as fentanyl is to street heroinâ 60 times more potent, flavor wise, and relieving. One hundred years ago, the tamale queens of San Antonio became a famous tourist attraction. Tamales have been harder to find in Des Moines since Rosa Martinez closed her La Rosa restaurant to concentrate on property management. Tamales Industry in Merle Hay Plaza turns out a fabulous product, but they are one of COVID-19âs biggest victims, suffering the double whammy of forced closure without rent relief.

So when a new player enters the corn field, we pay attention. Arturo and Lucy Reyesâ company Reyes Tamales is such a player. Their business card even features a crown, like the ID of the original tamale queens. Tamales are probably sold to go more often than in sit-down restaurants. A typical order is a dozen. But because Arturo works for Gusto, and Gusto owners also own El Guapo, he now supplies that restaurant. I recently attended a tamale night there in which 800 were sold with the cafÃ© giving 20 percent to the nonprofit group Drem Sed.

El Guapo (the handsome one) is a stylish cantina. No sombreros or serapes on the walls here. Instead there is a wall of high-end hub caps and local Latino art. A lounge area with couches and a sunset patio differentiate the mood from other Mexican places. The menu is distinctly different, too, mainly in its brevity. It fits on one page and includes six kinds of taco, five snacks, five sides, three quesadillas and two sopapillas. The tamales are so new they werenât yet on the menu on my last visit.

Tacos were made with fresh masa and were thicker than most. My favorites were nopales (cactus leaves) treated with lime salt, charred corn, pickled onions, green onion cream and cilantro; chili verde with tomatillo pork, citrus slaw, Cotijo cheese and radish; and chile colorado with adobo beef, pickled carrots, roasted green onions and queso fresco. That citrus slaw is worth ordering on the side to take home.

In contrast to the sharply edited food menu, the drink menu is huge. There are 17 silver tequilas, 18 reposadas, 13 anejos and seven upscale mezcals. Cocktails and margaritas can be most creative, and there are eight exotic beers on tap. Saturday brunch includes four items, including churro waffles plus bottomless mimosas and bellinis.

Pho, Vietnamese beef noodle soup, has almost no presence between Ninth Street and Waukee. Into the gap, All Pho You has arrived in the Uptown Shopping Center. Its new owner converted the former New Hong Kong, a very good Chinese cafÃ©.

A recent visit revealed a small Chinese menu still is offered, but itâs missing many New Hong Kong specialties like fermented black bean sauces for various dishes and regional specialties like Szechuan dishes. The Vietnamese menu covers most of the classics but in abbreviated form. For instance, there was only one bun (noodle salad with meat) offering rather than a whole menu section.

That bun was good and so were phos, which come in two sizes and a build-your-own option. Clay pot dishes were a treat, and the basil eggplant was a favorite. ♦