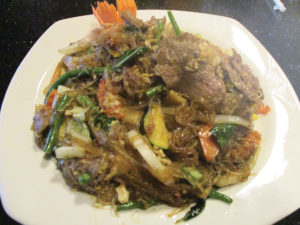 Pad Thai is much more than a restaurant named for a famous dish. One of the worldâs most famous inventions, Pad Thai is also a government-created cause. In the 1940s, Thailand suffered a rice shortage due to war and floods. Prime Minister Plaek Phibunsongkhram encouraged his people to eat rice noodles and promoted them as an identifying icon of Thailand. As a result, a new noodle called sen chan was created. Pad Thai has become the national dish. Today, some food vendors add pork or chicken (although the original recipe did not contain pork because of the governmentâs belief that pork was a Chinese meat). Some food vendors still use the original recipe. The movie âJao saao Pad Thaiâ stars a lovely young lady who promises she will marry a suitor who eats her pad thai for 100 days in a row.

Pad Thai Garden is the first Des Moines area cafÃ© to name itself for the legendary dish. Situated in the building that Jimmie Lynch designed for his Pan, Pane, it is a handsome, comfy venue with a fireplace and organic furniture. Most recently housing Lemongrass, it continues to feed the fast-growing Southeast Asian food cravings of the western suburbs. (Lemongrass has reopened on Main Street in Adel.)

If a trend exists in Thai cuisine locally, it is that familiar American vegetables are replacing more Asian vegetables. Pad Thai continues this. Most dishes are made with broccoli florets rather than Asian broccoli, carrots and green peppers. There is no eggplant at all â not the long purple ones, not the round greens ones, not any. Long beans are superb, the best vegetables in any dish. Few greens are on the menu at all. Not even spinach. No gourds, daikon nor baby corn. No galangal either. This is the way things are going as Southeast Asian restaurants in the suburbs please more non-Asian diners than those in the inner city.

Appetizers included the usual suspects. Egg rolls were stuffed with ground chicken, spring rolls with shrimp or tofu. Chicken satay was close enough to Lemongrassâ excellent version to not disappoint. Wings, potstickers, wontons and crab Rangoon were crowd pleasers. I preferred the salads and soups to the appetizers. Tom yum and tom kha were delightful mixes of six basic flavors, what Thai cooking is all about. Both larbs and the green papaya salad made great appetizers when shared.

Thai food is my No. 1 favorite for takeout. It lends itself well to reheating. Pad Thai Garden did a good job packaging my order. However, I waited 8 minutes after arriving on time to pick it up. I was told they starting heating it when I entered. Parking is excellent even at rush hours.

Bottom line â this is a good Southeast Asian cafÃ©, not as adventurous as Eat Thai, Pho All Seasons or CafÃ© 515, but probably just what suburban diners want. ♦