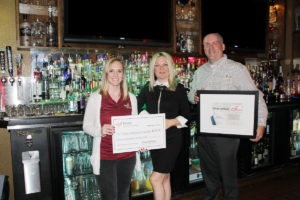 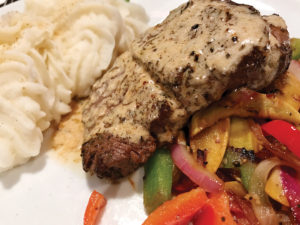 It was inevitable. Russians won an American election, yet no one called for an investigation of Kremlin collusion.
Irinaâs won the Ultimate Steak de Burgo challenge by collecting the most votes from CITYVIEW readers, beating out
AJâs, Sam & Gabeâs and Chefâs Kitchen in the finals.

Itâs about time Irinaâs won some respect. Itâs simply a fabulous restaurant that somehow isnât on everyoneâs radar
because itâs not downtown, not on Ingersoll and not in Beaverdale. Some people dismiss it as a Russian restaurant.
It isnât. The menu offers a number of Russian specialties, but all recipes are geared to what Iowans like.

âComing from Russia, my dessert tastes are quite different from what people here like. When I first got here, I
read that carrot cake was Iowaâs favorite dessert. I began experimenting with that,â said Irina Khartchenko, who owns the restaurant-bar with her husband, Dmitri Iakovlev.

She came up with a version that is the best I have ever tried and most everyone I know who has also tried it agrees with me. What does Irinaâs do to distinguish their version from so many others?

âThe simple answer is that being Russian, we put more booze in it and more fresh carrots,â she explained.

The restaurant offers Russian dishes like beef Stroganoff, chicken Kiev, and kebabs like pork shashlik, which are
particularly popular in Sochi, the resort city on the Black Sea from which the couple came. Irina says that Russian
nights, about twice a year, are the best time to come for more Russian experiences. They can get extravagant, too. Most of the standard menu is Iowa steakhouse fare â steaks, prime rib, chops, rack of lamb, halibut, salmon, duck, shrimp and pasta. The appetizer menu is more reflective of Sochi, with several clam, mussel, shrimp and calamari dishes, as well as buttermilk and bread crumb onion rings and chicken wings. The steak de burgo at Irinaâs is of the cream sauce school some Des Moiners call âGreek style.â It has more butter and less cream than most local cream de burgos. It features beef tenderloin, which most good de burgos do.

Irina grew up in Moscow, where her mother was a well-known chef who cooked for the Kremlin. Despite her
pedigree, she says Dmitri bars her from the restaurant kitchen.

âHe is afraid that women are going to ruin his recipes with too much salt,â she laughs.

Irinaâs has the best selection of vodkas in Iowa. I have not seen a better selection anywhere for that matter. Some go for $75 a shot for special occasions. She also hosts vodka tastings that can be bargain priced. She says she likes these because they allow her to educate Iowans about the huge variety of flavors that vodka can have.

âIt is really interesting to watch people taste potato, sugar cane, beet, rye and even fruit-sourced vodkas. We did a taste test recently, and everyone picked a sugar cane vodka, which is not sweet, as their favorite,â she said.

Most American vodkas are distilled three or four times. That removes all flavor. European vodka, not so much.
Irina also has some infused vodkas, including one with chilies so potent a shot will paralyze your lips and cheeks for
a few seconds. Russian beers, like Baltika, are also well stocked at the restaurant.

Irina and Dmitri also representa fantastic immigration story. Now American citizens, their journey of 20 years first landed them in Quebec. At the time, they were nearly broke and neither spoke any English or French. They crossed Canada over several years while waiting for an American visa. They slept in their car for years, mostly in Los
Angeles where it was warm enough to do that. How did they end up in Des Moines?

âThis is where the car finally broke down,â she laughed. ♦