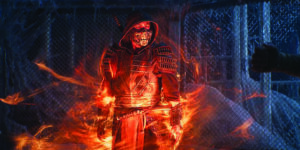 âMortal Kombatâ focuses its story initially on down-on-his-luck MMA Fighter and family man Cole Young (Lewis Tan). After being recruited by Jax (Mehcad Brooks) to join the Earthrealm warriors in Mortal Kombat, Cole serves as our entry point into this strange world of vampires, four-armed princes, and soul-sucking demons.

Jax and Sonya Blade (Jessica McNamee) have searched for Cole and others who bear the same dragon mark because something-something tournament of champions, something-something the fate of the world. This involves getting mercenary Kano (Josh Lawson) to take them to the Lord Raidenâs (Tadanobu Asano) temple, where Cole and Kano will have one month to train and discover their hidden powers.

Thereâs more to the plot, including the introduction of two already trained champions, Liu Kang and Kung Lao (Ludi Lin, Max Huang) and a slew of nasty, CG-enhanced villains â none of whom are anywhere near as interesting as Sub-Zero, whose powers provide a couple of genuine highlights here. But what will interest MK fans most is not the plot but the kills.

Action fans should understand that this franchise, despite its many nods to Asian cinema, cares more about pairing up colorful characters with superhuman powers than seeing development or motivations. The franchiseâs so-called âFatalitiesâ can get gory, sometimes replicating moves from the game: Yes, a man who wears a razor-brimmed hat does transform it into a circular saw and slice his female opponent in half lengthwise â quipping after, âFlawless Victory!â

If youâre like me, youâll find it difficult to connect with the newcomer Cole. Our introduction to the âMortal Kombatâ universe is seen through him, which is a shame because we donât know anything about him other than that he loves his wife and daughter. It would have been more interesting to focus on the Scorpion/Sub-Zero relationship throughout the movie rather than having it pop up occasionally as a background plot.

The performance of Josh Lawson as Kano was a nice surprise, but the real magic were the fight scenes involving Scorpion and Sub-Zero. Hands down, they were the coolest parts in this movie (no pun intended), with both actors doing a fantastic job despite the script. Hiroyuki Sanadaâs Hanzo Hasashi/Scorpion steals the show with the legendary fighting skills, seriousness and compassion that he lends to the role, while Joe Taslimâs Bi-Han/Sub-Zero menaces with only a glace and a shift in his eyebrows.

The choreography in this first scene is strong, blending moves familiar to âMortal Kombatâ fans with a level of intense combat that you donât really see made by Hollywood anymore â think blades stuck through the tops of heads. Hanzo is killed by Bi-Han/Sub-Zero, but his spirit is taken to the Netherrealm (think, Hell), where he will become Scorpion.

While starting strong with a fight between these two, the movie meanders through the second act of finding/training champions only to sprint through the finale and wrap up in a way that leaves you thinking, âThatâs it?â

The pacing ultimately sidelines one of the best baddies in the game â the shape-shifting sorcerer, Shang Tsung (Chin Han). Initially played by Cary-Hiroyuki Tagawa in the 1995 movie, he was a sinister, intimidating figure, sucking souls and trying to fix the tournament for Shao Kahn, his Outworld Emperor. However, in the remake, he does little more than assemble goons, touts Nitara â the winged vampire fatale as his âbeautyâ â and rants about having to kill Earthrealmâs chosen fighters.

Then he disappears from the film in the second act until the end when Team Raiden arrives to find Cole and his family at his MMA gym, right after his and Scorpionâs fight with Sub-Zero.

And itâs unintentionally comical. Right as he tells Raiden this isnât over and he has more soldiers, Raiden teleports him away with lightning mid-rant. And, yeah, thatâs it. Itâs an underwhelming finish. Shang Tsung is vanquished in the blink of an eye, without even setting up a new recruitment. He never visits Shao Kahn for new army members or explains his failure, making him totally bland as a villain. Worst of all, apart from the soul-suck on Kung Lao, he doesnât utilize his signature flaming skulls or ability to transform into other characters. ♦